Origin: United States. Developed from the same stock as the Amstaff, the Pit Bull remained a true performance dog. First recognized by the UKC in 1898 and later the American Dog Breeders Association was founded which registrated Pit Bull Terriers too.

​Legacy: Considered as the only true fighting dog, however, one has to realize that the majority of the Pit Bulls are not suitable fighters, only tested and gamebred dogs are. Also used as big game hunters, personal protection dogs and of course as family companion.

Size: Height: males 45,5-53,5 cm and females 43-50 cm. Weight: males 15-27 kg, females 13-22 kg. This is a guideline of the United Kennel Club, regardless of height and weight, the proportions are of greater importance. ADBA doesn't give sizes, as long as the dog has a correct balance. 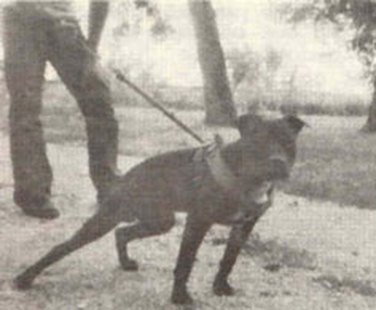 The Pit Bull Terrier - a phenomenon

Pit Bull Terriers are a true phenomenon, no breed is so much discussed. Unfortunately mostly negative and in the western world, complete laws were approved to eliminate them from society.

The question arises whether this is justified. Is this one dog responsible of the majority of incidents which happen with dogs, least, this is what anti-Pit Bull groups want us to believe. Their goal is to persuade the general public and its policy makers that these little, athletic dogs are deadly dangerous. Let's face it, we're talking about dogs with a weight range between 24-58 pounds..so one has to see things in perspective, especially compared to other breeds.

What is actually a Pit Bull? Is it a breed in the modern sense of the word, or is it a type which includes various breeds. This is where the so-called experts dropped the first sting. How can one judge a breed without even understand that it is in fact a breed. A Pit Bull is definitely a purebred dog, a breed that has been bred as such, even before many other breeds did. But where does the fairytale of 'Pit Bulls cannot be classified as a purebred' come from?

The main reason is probably that the breed isn't recognized by the American Kennel Club and therefor also not by the FCI. It's common knowledge that these institutions rule the dog world, their monopoly position and compulsive urge to control is totally inappropriate. If governments feel the need to interfere in dog related issues, maybe it's better to focus on severe health problems of various breeds and their partly responsible breed clubs, which in turn operate under the flag of the AKC/ FCI.

The second problem occurs when certain groups of experts go the opposite way...a fighting dog doesn't exist at all, Pit Bulls are just 'normal' dogs which being made agressive to fight. This type of expert usually goes on to tell u that any dog can be teached to fight and it's all about a good education. This theory is unfounded and completely ignores the origin and legacy of the breed. Acknowledging its origin is necessary to subsequently be a responsible owner of these kind of dogs.

What exactly makes a Pit Bull a natural fighting dog, which traits are genetically present in these dogs and what selection criteria were and are applied to achieve and maintain such traits.

Gameness is the key feature for a fighting dog. Gameness is often misinterpreted and maybe therefor also attributed to dogs which don't possess this trait at all, or, at least, in a total different degree. Also, it is often confused with aggression. Of course game dogs can be aggressive towards other dogs but an aggressive dog isn't necessarily game. Gameness can be explained as an absolute determination to win, whatever situation or opponent and without being influenced by fear, fatigue or pain stimuli. Inherited is also the will to end a fight, submissive signals will be ignored.

Gameness also means a stable and confident nature with an enormous threshold of pain. They are very athletic and are willing to work for their master; extreme capable working dogs which can do almost anything. These features make Pit Bulls great family dogs. They are also suitable for many types of work...therapy dog, rescue dog, guide dog, you name it. They also can be trained as protection dogs but as a property or estate guardian they are less suitable, because of their gentle nature towards people.

In contrary to common believe, the general Pit Bull population isn't half as game as people brag about. First, there is a clear distinction between 'working' Pit Bulls and the so-called 'Pet Bulls' and not to speak about all those new type of Bullies, which of course have nothing in common with a Pit Bull. There is only one way to breed for gameness and that is by testing the dogs before breeding. This can be done by a sort of harsh 'roll' against an experienced, slightly heavier opponent or just by matching him. But in both cases, the dog has to be properly schooled and conditioned. It's assumed that there are different degrees of gameness but one has to be aware of the fact that each day is another...in an identical situation, a combination of factors can make a winner one day but a loser the next, so it's also a bit relatively.

So 'gamebred' Pit Bulls or Gamedogs has to be produced by tested parents..period! This is the only way to maintain the true American Pit Bull Terrier.

The vast majority is far removed from the original concept...it's comparable for instance with German Shepherds. Within the German Shepherd population there clearly developed two types, show and work type. The show type Shepherds hardly can be compared with the working line dogs, both physically and mentally.
This is because German Shepherds for years were bred for appearance, in this case even a bad appearance because of the way these dogs are built today with these far to long and extreme sloping backs. This makes them physically handicapped as working dogs.  The minimum obligatory work tests they have to pass to qualify for breeding suitability are a farce, these tests are meant to judge character and conformation. Trials like Schh I, which is a minimum requirement, doesn't tell you anything about the working abilities of the dog, it only proves that the dog can learn some tricks. About conformation....how on earth is it possible that dogs with such backs and hindquarters obtain a breeding suitability certificate...

Maybe it's time to stop promote the average Pit Bull as being game fighting dogs and understand the difference. However, it can be a bit difficult to preserve the true game dog as such, because of existing laws against dog fighting in most parts of the world.
The nowadays increasing popuarity of 'alternative' sports are a fun and healthy pastime for dogs and their owners but can they be seen as a relevant substitute for the original work? It certainly can indicate a dog's working drives, hardness, stamina and perseverance...and with that maybe prove some degree of gameness. Although, even in generally accepted dog sports it possibly will give you problems when you really put your dog to the test, animal welfare groups are always lurking.