Origin: United States, developed from Staffordshire Terriers, brought by the English and Irish in the 19th century during their migrations to the US. Closely related to the Pit Bull but bred from another perspective. Recognized by the AKC in 1936.

Legacy: In fact, the show-version of the Pit Bull. Todays use is mainly family companion but the Amstaff is certainly suitable to train as a protection dog. 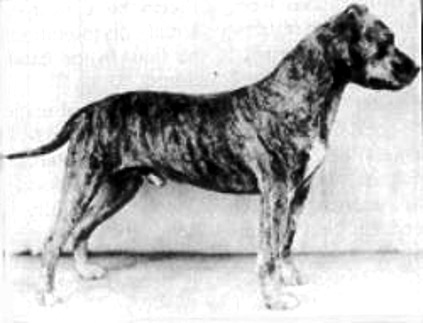 AKC Champion Mickey Do, 1933 (Perchino Snappy Giant x Morris Bucky Ann).
The American Staffordshire Terrier - a shadow of its past
To avoid confusion it should be clear that all fighting dogs brought by the English immigrants, prior to the recognition of the American Staffordshire Terrier by the American Kennel Club in 1936, must be regarded as one, they were known under different names, such as Staffordshire Terrier, Bull & Terrier and Pitdog. In 1898 the United Kennel Club was founded by C. Bennett, in order to provide registration of fighting dogs. They choose to recognize these English pitdogs as American Pit Bull Terrier and the first registered one was Bennett's Ring, owned by Bennett himself. At first the UKC promoted dog fighting but later they banned the sport, in 1976 it was illegal in all states. At that time, 1889, the American Kennel Club, which was founded in 1884 wouldn't register the English pitdogs because they want to distinguish themselves from such practises as dog fighting and concentrated on showing dogs.
​
It was not untill 1936 that the AKC recognized these Pit Bulls, probably because of the popularity of the breed. However, the AKC began to register the Pit Bull under the name Staffordshire Terrier (American is added in 1972 in order to distinguish them from the English Staffordshire Bull Terrier). The first registered Staffordshire Terrier was the famous Lucenay's Peter (dob 1929), bred by A. Keller. Peter became world famous as Pete the Pup in Hal Roach' Our Gang movies. Peter was a UKC registered Pit Bull and became the first dual registered Staffordshire Terrier. The breed standard was based on Colby's Primo, born in 1935 and bred and owned by John P. Colby. Primo was sired by Colby's Brandy, out of Colby's Mabel. 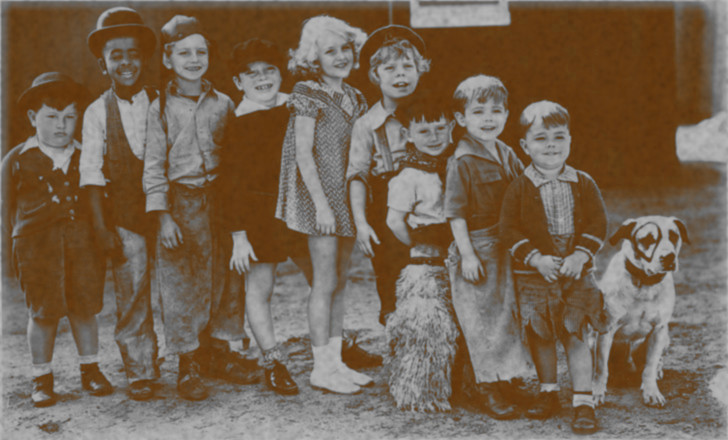 Lucenay's Peter, 1929 (Black Jack x Keller's Peggy O'Neil) & Our Gang.
In order to built a studbook, for some years it was possible to register UKC Pit Bulls as Staffordshire Terriers but at a certain moment the AKC closed their studbook. From that time, only litters which both parents were AKC registered were able to obtain a pedigree. Later the studbooks were opened to Pit Bulls again for some time in the early 1970's.  AKC American Staffords dual register under the name American Pit Bull Terrier is still possible with both the UKC and the ADBA.

It's clear that the American Stafford actually descended from the Pit Bull, that is to say, it was just the same dog with a new name. Ridiculous really, certainly when you consider that organizations like AKC and FCI the existence of a breed called American Pit Bull Terrier nowadays simply deny. But if we forget dual registering AKC Staffords to the UKC and ADBA (which moreover is a bad thing imo), and looking at generations of purebred strains of gamedogs, we can conclude that the American Stafford and the Pit Bull have developed into 2 different breeds.
​
According to Pascoe (The American Staffordshire Terrier, 1977) the foundation is based upon mainly five different strains, of which the most famous undoubtedly are the Ruffian and the X-Pert strain.

RUFFIAN LINE
​
Founded by C.S. Harriman and C. Whitaker. At the base of this line stands the in 1938 by F.C. Klump bred dog The Ruffian. Later in 1947, Peggy Harper of Harwyn kennels bought Ruffian Headlight Hall and after that Ruffian Dreadnought. She became very succesful breeder of Ruffian dogs and instead of gaining fame under her own, her dogs continued famous under the Ruffian name. With the exception of the infusion of X-pert Rowdy Rascal (X-pert Red Rascal x X-pert Gallant Lady) in the early1960's, this strain is kept pure. Some famous Ruffian dogs were: Gallant Ruff (1949, sired by Ruffian Walkaway, out of Puddin Pie Pepperduster), Red Rock of Harwyn (Ruffian Skye Bolt of Harwyn x Ruffian Golden Lady of Harwyn) and Ruffian Scalawag (1940, which was out of Schroeder's Muggins, sired by The Ruffian).
X-PERT LINE​

This bloodline dates from the early 1930's and was started by Clifford and Alberta Ormsby with X-Pert Torpedo and Ormsby's Madge. Madge was sired by Bennett's (Corrington's) Mack, out of Bennett's Queen. The foundation of the X-Pert strain consist Tudor, Colby and old Henry blood. Tudor became known as one of the most succesful dogman of its era. His dog Black Jack, a 16xW appears a lot in Staff pedigrees. Torpedo was a linebred Tudor dog (Black Jack), sired by van Vliet's Black Grenadier, out of van Vliet's Great Labelle. This strain produced many great dogs such as Comstock X-Pert Pack-a-Wow, born in 1939 out of X-Pert Goldie Girl, sired by X-Pert Tiger Pat. He became the first X-Pert AKC Champion. Some other well-known X-Pert dogs were X-Pert Black Nellie (Uppies X-Pert Biff's Shadow x X-Pert Satin Boots), born in 1971, Sligo McCarthywich was produced by X-Pert Brindle Tiger, out of Brindle Nellie in 1979 and X-Pert Brindle Biff, born in 1946 (X-Pert Black Ace x X-Pert Galant Betty). This line still exist and always has been very succesful, little doubt that there's no Amstaff to find without X-Pert in his ancestry.
TACOMA LINE

​Foundation dog of the Tacoma line was the famous Tacoma Jack, a 9xW, owned by Al Brown. Jack was born in 1927 and bred by Charles Doyle out of Gardner's Queen Vicky, sired by Smith's Butcher. Brown bred Jack to Brown's Judy, which was out of Brown's Daisy, sired by Jack Dempsey (6xW); son of the famous Tudor's Black Jack which was a 16xW. These breeding produced some great quality dogs, including Tacoma Jack's Replica, which became a 4xW. Initially, the Tacoma line consists a combination of Tudor and Colby blood. Back in line we find old Henry and Lightner blood. Doyle later used Young Joe Braddock in his breeding program. He was out of Kitty Corvino, sired by the famous Corvino's Braddock, a 14xW. The 'purebred' Tacoma dog should be hard to find these days and there are other strains, like Sertoma, which still carry Tacoma blood. Through foundation dog Shurguard"s Chief of Staffs, the Sertoma strain was a mixture of Gallant and Tacoma blood.  Chief was out of Jenkin's Kate, sired by Doyle's Tacoma All-a-Blaze (3xW). This line however, founded by Theo Rayburn in the 1950's, also appears to run the risk of extinction. Tacoma dogs were always renowned for their drive and working ability. 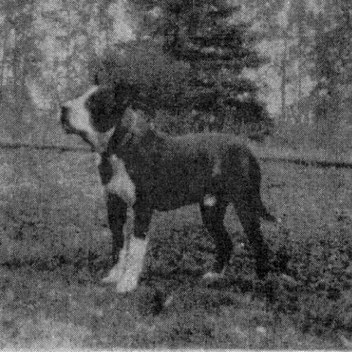 In 1955, Knight Crusader was born out of Gallant's Ruff's Suzie Q, sired by Rossmore's Naughty Knight, which was bred by Dorothy Shaffer. This breeding, which also produced Knight Bomber and Knight Patroller, became the foundation of the Crusader line, initiated by Ike and Jean Stinson.

​The last major foundation line of the Staffordshire Terrier is known as the California line, which in fact is a mixture of different, already existed, bloodlines. Mainly originated by Ruffian blood (Lylane, Gallant, Harwyn). Some famous California dogs were Harrison's Bozo Boy (1936), bred by R.C. Steele; out of Steele's Ruby, sired by Steele's Bozo, Duke of Felton (Steele's Young Red Buck x Steele's Sherry) and Lylane Princess Amber (Longbotham's Red x Bev's Queen Crusader), bred by Elizabeth Tregoning. Eventually the California line proved to be very important in the development of the breed.

Today, the majority of the American Staffordshire Terriers are scatterbred and their original traits have been lost. Although the common Amstaff is a loyal family dog, he has become a shadow of what he once was. Some will say it's improvement but still, Staffordshire Terriers are intended as working dogs. In contrary to some assertions, they are not game and therefor not suitable as fighting dogs. There are other kinds of work in which they can excel, such as weightpulling or protection training and luckily for the breed there are breeders and other enthusiasts out there which engage in such sports. Selection based on performance is always very important regarding to preserve a (working) breed.  Too often, breed-fanatics and novice dog owners ascribe characteristics of bygone days to their dogs, they simply don't understand (or don't want to..) that working abilities only be preserved by testing dogs before they will be used for breeding. Breeding for appearance contributes nothing, a dog may look tough but this does not prove that it is and that's unworthy for this once proud gladiator.