Amstaff in Holland - the early years 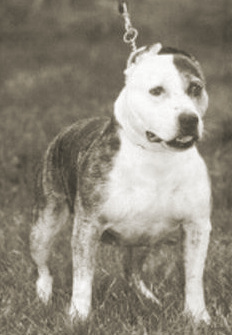 At the end of the 1980's, Dutch and German Amstaff breeders have established their name and they were renowned for their quality.  Influential breeders of that time were Jos Walstock (Tippitt's), Max van Slijpe (Old Hickory) and Frans Diaz with Peter Marks (Chasqui & Skram's). Regarding German breeders; Arthur Hagele, Hermann Schaller and the earlier mentioned Ruth Riols come to mind.

At the time the American Staffordshire Terrier is introduced in Holland, the Pit Bull already was present and before 1983 you come across plenty of ads where Pit Bulls were offered for sale, with or without (ADBA) pedigree. With the growing popularity of Pit Bulls, the negative media attention also increase which in turn attracts the wrong crowd. One of the first articles which outline a clearly negative image concerning the Pit Bull appeared in februari 1986 (Vrije Volk), it was entitled 'Pit-Bull, a weapon on 4 legs'. How do you mean seditious....anyway, the media smear-campaign had begun and would certainly persist for the next 7 years. All kinds of so-called 'experts' suddenly appeared, which all had their own fairytale opinion. One of the annoying statements was ofcourse that the Pit Bull was considered as being the same as the American Staffordshire Terrier and thus the breed was also associated with dog fighting.
​From the beginning, the Dutch Amstaff Club distanced itself from dog fighting and membership required a declaration on paper that the person concerned would not engage in dog fighting.

The American Staffordshire Terrier has developed well in the Netherlands and is quite popular. Due to its great popularity, there is an extensive trade of Staffs without pedigree and with unknown backgrounds, offered for low prices. Perhaps this is due to the fact that American Staffordshire Terriers (if they are born in the Netherlands), before they are allowed to use for breeding, have to pass a behavioral test (MAG-Test). Only then the pups can obtain a pedigree, however, when you for instance use a foreign stud, then this rule doesn't apply. This test isn't required by law, it's just maintained by some breed clubs in cooperation with the Dutch Kennel Club.

As a result of a series of (deadly) incidents caused by Pit Bull type dogs in the early 1990's, the Dutch government introduced the RAD law (Regulation of Agressive Animals) in 1993. These regulations remained in force for the next 15 years, in 2008 this so-called 'Pitbull Law' was abolished. This law entailed that keeping and breeding of Pit Bulls, born after 1993, was prohibited. Because the 'experts' refused to acknowledge the Pit Bull as a purebred, so every dog that showed just a little resemblance became a victim of the RAD law. In daily life, this meant that every Amstaff without FCI or AKC pedigree, could be confiscated. After being confiscated, an expert (usually a vet) reviewed the dog. When determined that it concerned a Pit Bull, the dog became euthanized. Luckily the RAD is being abolished in 2008 but the behavior test that is required by the Dutch Kennel Club is an aftermath. 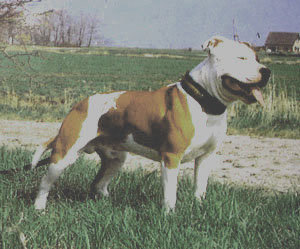