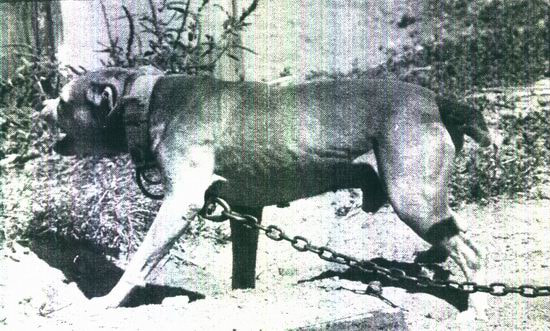 Anderson's CH. Tonka ROM (Patrick's Tombstone, 1xW x Patrick's Red Baby ROM).
Tonka was a dog owned and handled by Ronnie. He was bred out of Tombstone ROM and Red Baby ROM. This was a ROM litter as Tonka, Crash, and Snubby all went on to win their championships. He was by all means a great Champion of a dog. Ronnie Anderson had bred many famous Champions with Tonka before Pat Patrick purchased him back from Ronnie Anderson. Due to all his productions not being reported, he is not a ROM dog. He did however produce over 10 Champions and numerous other winning dogs. If all of Tonka's offspring that had make Champion had been registered, Tonka would have had at least 10 points on the Register Of Merit list.

One of the best kept secrets in todays Bulldog rhealm is the bloodline that evolved from Tonka and many of the men using the dogs that surrounded him. Anderson also owned a dog named Red Baron. Baron was a 7xW and 1xLG. He was a great dog.

There was also a son of Tonka in the Lone Star state named Red Rock owned by the late Bobby D. Smith. Rock was a supergame 2xW and fabulous producer siring loads of great dogs for Mike N. Crabb, B.D. Smith, Dean Wise, McKnight, Johnny G. and others. Rock's most famous son is Keyes' Meathead. Meathead has sired about 50 1xW and a load of great dogs. Some of Meathead's progeny have been 3 hour dogs which is a consistant expection with these dogs. The gameness and ability has been very consistent in this family. Producing modern day greats such as Buckskin Billy, Bully, a 4xW, who was owned by R. Jr. for a short time, Levi, Honky Tonk, Anderson's Bull, and Little Eve.

This line is being used heavily today to produce some exceptional dogs when crossed on other lines. The CH. Alligator line crossed with the Tonka/ Red Baron dogs, is proving to have tremendous results.