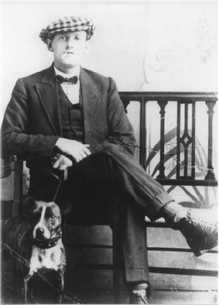 Joe Mallen (1890-1975) & Mallen's Johnson (Mick x Rose).
The Black Country has been the home of the Staffordshire Bull Terrier since long before 1935 when the breed was first registered with the Kennel Club. Before this date these dogs were referred to as Fighting Terriers, Bull & Terriers or Pitdogs and were kept mainly by workers in the chain and iron factories or by miners. Times were hard, wages small, hours long. Men and women (for women too, worked in the chain factories) were tough; therefore it is not surprising that these folks were not squeamish about the form of relaxation to be had. Those who had the room and inclination kept pigeons, poultry or dogs. Pigeons and Whippets meant racing, Cocks and Bull & Terriers meant fighting. Although illegal, fighting went on right into the thirties; some say it goes on even today! Many who didn't own any livestock went along to watch and wager bets, however small. It was all part of life and even the church at Wednesbury has a cock, spurred and trimmed, so they tell me.

All these thoughts, and many more were in my mind as we sped down the M6. At the Halesowen turn off we quickly reached the peace and beauty at the edege of the Black Country, glad to leave the grim dirt and belching chimneys behind us. We ambled through Pedmore and Stourbridge to the lovely village of?? Here we stopped and enquired the way to Joe Mallen's home at White Hill. We had no difficulty whatsoever, for of course the workmen we asked had all heard of Joe. At 82, having been interviewed more than once by men from the 'telly' and radio, Joe's fame has spread far beyond his doggy friends.

On arrival at the trim little bungalow 'De Boxill' (named by Joe's late wife Lil, after their good friend Dr. Boxill) we were greeted by a small, rough haired, white Terrier chained to an old fashioned, spotlessly clean kennel. She sniffed and moved her head in approval; she knew right away that we were friends and that Joe, who was hurrying out to meet us, was safe. After a little fuss and a pat she settled down contently to snooze once more in the warm sun. The pale, sightless eyes closed and she continued to dream on about her 15 years of rat catching and such like. She serves her master well, now that he's too old to keep a fighting dog.

Once inside, we were immediately made very welcome and within seconds my glass, with a beautifully engraved fighting cock on it, was filled to the brim and so were Joe's and my husband's. For those who don't know, Joe's favourite motto is "Win or lose, we'll have some booze". Well, Joe and I have enjoyed many a drink together but not at 'De Boxill' before, so there was plenty to toast and talk about.

It was on July 11, 1890 at Cradley Heath, that Joe was born into a vastly different world from today's. At 13, he left school and started to work, blowing a pair of bellows for a chainmaker from 6 am to 5 pm. When he reached 14 he went to William Harback's Anchor Works, striking on anchors until he was 16. Then on to William Griffins & Sons, Triton Works, Cradley Heath, where he worked for 54 years.

Joe married Lil at Lye when he was 21 and how he misses her today, but he finds some consolation in the knowledge that she was one of the best loved and most respected women the Staffordshire Bull Terrier fraternity has ever known. On July 11, 1921 they took over the management of the Cross Guns Inn (sometimes known as the Old Cross Guns), Cradley Heath, and Joe continued to do a full time job. A great deal of work fell on Lil's capable shoulders. They were a handsome, popular couple, well thought of by the brewery and all who knew them. Joe was well made, strong as a bull and very handy with his fists.
By now the fighting dogs were as much a part of married life as their young daughter May. In those days dogs were kept as dogs; in kennels, outhouses and in the pub cellars. These dogs were what is known in Stafford language as 'dead game', which means that they had courage and were known to be able to fight, otherwise they were not tolerated. With customers in the pub, friends and the family they were very friendly creatures and any child could have a rough and tumble with them. Even when exercised outside on collar and lead, they were not raving lunatics, looking for other dogs to kill as so many people like to imagine. It was only when such dogs were prepared for a fight and ready to be slipped loose that they changed. Joe's first bitch was a great granddaughter of a dog called Blue Jack. This dog was owned by Walter Slim, the uncle of a family friend, and he came from Smethwick. The bitch was a fawn colored, cut eared (cropped) Stafford.

The names of some other dogs to look for in old pedigrees which Joe has owned or bred, are Mallen's Nell, Brave Nell, Old Cross Guns' Lucky Jim, Simon, Trudy, Cradley Tyke, Sally, Show Boy, Cross Guns' Johnson, Lady Liquer, Carless Bill, Alf's Kit, Lofafellow, The Great Bomber, Stowcote Pride and of course CH. Gentleman Jim. Joe also bred Triton Judy, CH. Gentleman Jim's dam and gave her to Jack Dunn. Fearless Joe was Judy's litter brother and went to Harry Pegg. There is no doubt that the dog which will always be associated with Joe Mallen's name is CH. Gentleman Jim, the first dog to become a Champion in the breed. Jim won his tickets under Harry Pegg at Cruft's on February 8 1939, H.N. Beilby at Welks, May 3 and A.W. Fulwood at Bath, May 4 and on that latter day Joe Dunn's Lady Eve became the first Champion Stafford bitch. 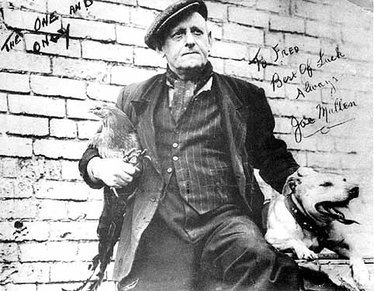 Joe Mallen (1890-1975) & Stowcote Pride.
Standing in a place of honor at Joe's home is the silver tray presented by Arthur Heald for that memorable Cruft's win and around the walls are photos of some early shows and a very old frame with a notice about Blue Jack, stating that this dog is 'Open to fight anything in the world from 50 to 500 lbs' at Smethwick, 1893.

When CH. Gentleman Jim died it was all reported on in the local press, and he was buried in state alongside the railway by William Griffins Works. There isn't a Stafford fancier in the whole world who hasn't heard of Jim, that pied wonder, dead game; the highest praise of all, worth more than all your Cruft's certificates. I looked at a bit of jaw bone with one of Jim's fangs attached to it, with nearly the same reverence as a pilgrim to Rome looks at a sacred relic, for I too, like so many more, have boasted that my first bitch went back to Jim. Of what fun and companionship they all had in the early days, in spite of the hard times and little money! After the formation of the Staffordshire Bull Terrier Club in 1935, Joe and his pals travelled up and down the country by tram, train, coach and very occasionally by car, to support the Stafford classes. There are too many names to record all, but special friends were Jack Dunn, Amos Smith, Arthur Baxter, Bill Tip, Jimmy Timmington, Dr. Boxill and E. Rollason. What tales I've heard of some of their outings.

We could have gone on all day talking about old times, about dogs and odd characters who put rabbits and rats in their shirts and then added a ferret and awaited the results! Or who bit the heads off rats, all for bets or pints and about the cocks that Joe and his friends used to breed, not just tiny beauties but fine, proud 5 to 6 lbs ones, as carefully bred and as game as the Staffords. However, daughter May's turkeys needed feeding up at the farm and Joe had to get up there to see to them and we has had to set off back to Lancashire. So regretfully we made our way, via the local pub, where we bumped into other Stafford enthusiasts and then towards the farm, where we eventually dropped Joe off.

As we waved goodbye to our wonderful old friend, thoughts of the words written on the testimonial, given to Joe on his retirement from William Griffins & Sons Ltd, for the period of his work there (1904-1958): "As a maker of large diameter chain and of general smithwork, there can be none to surpass him, and few to equal him". Let no Stafford owner ever forget all that Joe and his pals made possible for us in 1935. At 82, Joe shows us all an example of how life is here to be lived to the full. He still 'comes up to scratch' and for that Stafford folk forgive all and agree with William Griffins that 'There's none to surpass him and few to equal him'.