During the Industrial Revolution, which in fact started in 1757, the rich becoming richer and the poor getting poorer. The wealthy posessed huge estates which they used for hunting. These estates were maintained and protected by gamekeepers against both animal as human poachers. Poaching for the poor was a way to survive.

During the reign of Queen Elizabeth 1 (1558-1603) poaching at night allready could be punished by death...however poaching during the day not.The 'Night Poaching Act' of 1816 maked it also possible to ban a poacher to Australia for 7 years....Because of the heavy penalties the gamekeepers ran a considerable risk during their work and poachers didn't always work alone...which placed gamekeepers in a even more vulerable position.

While poachers mainly worked alone and in silence till around the 1750's, at that time there appeared a new way of poaching, namely in the shape of gangs and these poaching gangs weren't silent at all...they operated with brutality and didn't any efforts to conceal their presence. This phenomenon was first seen in the east and south of England but soon spread to other parts of the country. 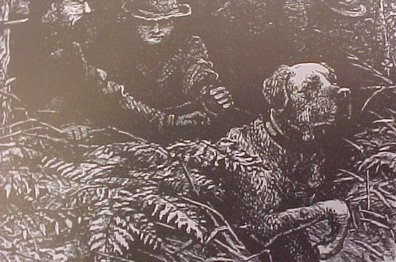 Gamekeepers and their Night Dog, 19th century.
Dogs proved to be very valuable to gamekeepers to assist in their work. Mastiffs crossed with mainly Bulldogs and Bloodhounds seemed most capable to search and catch poachers. In fact, breeding programs of gamekeepers of that time can be considered as being the first serious attempts to create a working type Bandog, which led to the development of the Bullmastiff breed and eventually recognition by the British Kennel Club in 1925. However, allready in the early 1880's the Kennel Club registered Bull & Mastiff dogs, crossbreds between Mastiff and Bulldog...

The first Kennel Club registered Bullmastiff is Farcroft Fidelity (dob 1921), owned by SE Moseley of Farcroft Kennel. Moseley also founded the National Bull & Mastiff Police Dog Club which indicates that the main goal of these breeding programs was to preserve the true working Night Dog. Moseley can be seen as one of the key players from the early days of the breed.

It's assumed that his ideal ratio was 60/ 40 Mastiff/ Bulldog, but there is no absolute proof that it has indeed happened that way. These dogs training included obedience, agility and manwork. Manwork was conducted both with and without bite suit. However bite suits at that time were not comparable with the thick protective suits like for example the French suits of today. Actually, these old gamekeeper trials can be seen as the forerunner of today's competitive dogsports like IPO, Schutzhund, Ring and KNPV...with an important difference, those dogs were trained for the real deal because they have to cope with the harsh reality of their often dangerous job.

A different and not related strain of Gamekeeper's Night Dogs was bred by W. Burton of Nottingham. It's never been entirely clear from which dogs he created his line of Night Dogs but it's been said that he used working (old type) Mastiff along with old type (fighting) Bulldog/ Staffordshire blood. His dogs were not that big (around 40/ 45 kg) and mainly brindle. The famous and most notorious dog of Burton was called Thorneywood Terror, a 43 kg, brindle male.

With Terror in a steel cage, Burton travelled through Great Britain to demonstrate its capacities as a gamekeeper's dog. There were bets placed and money was offered to those who thought they could escape to this dog...nobody escaped Thorneywood Terror. These kind of demonstrations were common in those days and generally the dogs were muzzled during these contests. Some of Burton's dogs were double registered, both as Bull Mastiff as English Mastiff and Thorneywood Terror for example was the sire of Moseley's Farcroft Pedro (Bullmastiff) but he also sired pups registered as English Mastiffs. Later Burton also bred show type Bull Mastiffs under the name Navigation Kennel.

Bull Mastiffs were of very variable type till around the 30's, it's about from that time that the Bull Mastiff as a breed became more of a unified type....They became heavier and with a more expressieve head. Working abilities were becoming less important and with time there was no longer worked with these dogs at all. The once preferred color, brindle also became rare as the fawn/ red color was more popular at dog shows. it's mainly thanks to Ted Warren and his wife Florence that the brindle Bullmastiff survived those years. Warren also was chairman of the Southern Bullmastiff Society from 1937 till the 1960's and was the owner of the Harbex kennel. 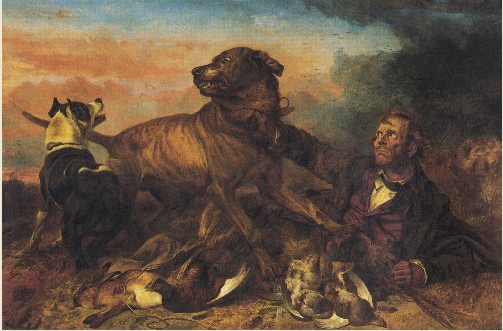 'The Poacher', dated 1868 by Richard Ansdell (1815-1885).
Gamekeeper's Night Dogs had to be capable to work alone in often hard and dangerous conditions, they were sharp, agressive and were able to kill a grown man, there are reports of such incidents and some dogs were notorious of there killing insticts....It is a fable that Night Dogs just threw a localized poacher on the ground and held him till the gamekeeper came... without using its teeth.

Almost every piece of written history about the Bull Mastiff (and former Night Dog) states that these dogs never used their teeth but only overthrew a possible opponent. This is extremely unlikely given the circumstances in which these dogs did their work, often in which it was a matter of life and death. Moreover, anyone who has experience in training dogs for bitework, knows that it's almost impossible for a dog to completely restrain a grown man who fights for his life without the help of a powerful bite.

The Bullmastiff of today is not the Night Dog of the past anymore...It's changed into an easygoing, family companion/ guard dog. It's no longer a working dog either and despite the lost of its once so celebrated abilities as a gamekeepers dog, we can nevertheless regard the creation and development of the Bullmastiff as the most succesful Bandog program ever. 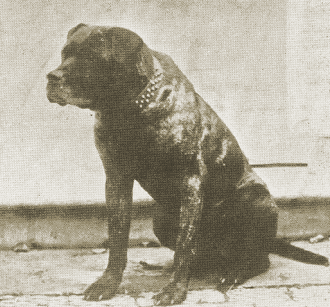 Thorneywood Terror, ca 1900.
"The typical Thornywood night dog should be no less than 80 lbs and if it be 100 lbs and fit and agile, all the better. It should be dark with a clean close coat with little in the way of markings for easy concealment at night. It should fear no man or group of men, no matter how sinister their intention. It should be able to face whip cudgel and shotgun with equal enthusiasm and show no shyness or fear of the aforementioned. Once engaged with its tormentor it should grip like a vice and fight like a lion and never relinquish its hold of its own accord, even if it comes to serious mischief and takes its death. In my charge he should be obedient and faithful. In my home or in his kennel he should be quiet and good tempered. There is no better or hardier dog than a good night dog."  (W. Burton of Nottingham)