Origins of the breed - how it all began (by Bill Boylan) 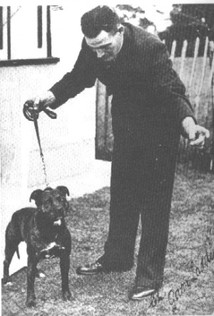 Bill Boylan & Game Laddie, 1936 (Game Lad x Mad Molly).
The Cradley Heath Club was formed at the 'Old Cross Guns' where the hosts were Mr. and Mrs. Joe and Lil Mallen. I know that Joe claimed that while his wife was the licensee, he himself was just a customer. The purpose of the move was to be able to apply to the Kennel Club for 'Staffordshire Bull Terriers to be recognised and accepted as a seperate breed under Kennel Club rules'.

During 1933, Staffordshire Bull Terriers were mentioned in 'Our Dogs' after an article in John Bull about the miners' fighting dogs. A letter appeared in that journal about these dogs that had no written pedigree. It was late in 1934 that a real move was made when a letter appeared in 'Our Dogs' from Stewart Poole of Tipton, who asked for anyone interested in the formation of a club for Staffordshire Bull Terriers to contact him. I did this but unfortunately, he received only nine replies so it was decided to wait a while and use 'Our Dogs' to emphasise the betterings about this wonderful breed that had taken a lot of stick owing to bad publicity of the dog fighting days.

About three months later, Joe Dunn saw Joe Mallen at work and asked him if he would help in the formation of a club and could a meeting be arranged to take place at 'The Cross Guns' and to canvass a small number of the locals to become members for five shillings. Mrs. Mallen agreed to it and the meeting was quickly arranged at which were nine or ten present, one of whom Mrs. Mallen loaned the five shillings membership! I have these names; three of the group were Fred Silvers who owned the original 'Queenie,' Jack Shaw who owned 'Jim the Dandy' and Harry Pegg who owned 'Fearless Joe.' 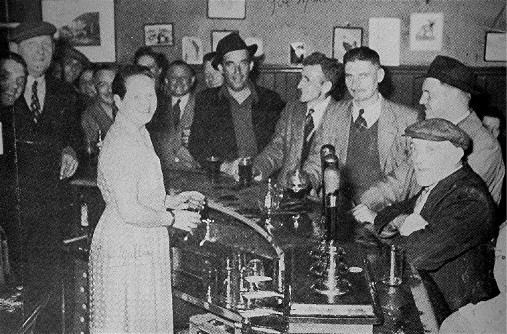 Old Cross Guns, 1935.
The first Cradley Club Show was held following this event and took place nine weeks later, 17th August, 1935 with Mr. H.N. Beilby as judge. All the notable dogs of that era were there, such as 'Jim the Dandy' from whom the original standard was chiefly taken, 'Cross Guns Johnson,' who six months later secured the first award for Best of Breed at Crufts, 'Fearless Joe', his son 'Vindictive Monty' (the first one) and my own 'Game Lad.' In bitches, were 'Brave Nell', 'Queenie' and from the north, 'Lioness'. The awards were: Open Dog and Best in Show 'Jim the Dandy', second 'Game Lad' and third 'Cross Guns Johnson; Res. was 'Vindictive Monty,' Open Bitch 'Brave Nell', second  'Queenie'and third 'Lioness'; Res. 'Victorious Lass.' Special awards other than for best dog and bitch were for best second prize winner and best over four years of age were awarded to 'Game Lad.'

Crufts 1936 was another important event for Staffords, as this was the first time our breed had been on view there,and much attention was paid by a man who heard so much about these dogs in the past. Mr. Joe Dunn, the club secretary and founder was chosen to judge. He made Mr. Joe Mallen's 'Cross Guns Johnson' Best of Breed and Tom Walls brindle bitch 'Brother of Looe' best bitch. It is sad to report that the dog died soon afterwards and did not leave any progeny. That was a tragedy which could have been avoided, and no doubt meant a big loss to us as a breed.

The next big event to take place was a very well publicised show named Wembley National Dog Show held in conjunction with the Star Dog Tournament. This show was managed by Mr. Leo Wilson, a big name in the dog press and a world wide judge. The date, 2nd October, 1936 and two classes were Staffords, one of which had 24 entries and all the well-known dogs were included.

I well remember the arrival of the Cradley coach with those dogs at the Wembley Way. I wondered how they had fared on the journey as they were all in a lively mood and did manage one scrap on the benches. Two contenders were Jack Barnard's 'Barham' and 'Cloth of Gold.' Jack had by then bought 'Jim the Dandy' and had him there with his others. The well known all rounder, Mr. Jas. Saunders, was the judge for Staffords and for his best dog and Best of Breed was a newcomer to us, Miss Joan Elliott's good brindle 'Bocking-Joseph' with' Game Lad' second. Best bitch was my own 'Timyke-Mustard' who was sired by 'Game Lad.'

By that time Joe and Mrs. Lil Mallen had become our friends, and this developed over the years into real affection, but with the loss of 'Cross Guns Johnson' Joe seemed out of things and events, but he soon got a young brindle dog registered as 'Game Bill' whom he later sold to Dan Potter. This dog went on to win Best of Breed at Crufts 1937 under Phil Dee.

However, on 25th May the same year, 'Gentleman Jim' was born, bred by Jack Dunn and sired by 'Brindle Mick,' who was the dog-founder of the well-known M-line and incidentally he was full brother to 'Cross Guns Johnson'. That was very satisfactory to Joe and it did help him over his previous bad luck. This turned out what was to be a second good start, as history has proved. Earlier, on 1st January, 1936, I also had bred a litter that included a brindle dog which I registered as 'Game Laddie', who later entered for Crufts 1938 at which show 'Gentleman Jim' was entered in the puppy class. He was made best Stafford puppy in show, while 'Game Laddie' was made Best of Breed. The judge was Mr. H.N. Beilby. Of course it is well known that 'Jim' was the first Champion of our breed; in fact, he and 'Laddie' were the only Champion dogs to be made pre-war.

That, I suppose, is how it all began, and started to grow as the second formation was of our own Southern Society, whose first show was held 1st May, 1937, the judge being the well known all rounder Mr. Jas. Saunders, who had an entry of 76 made by 21 exhibitors. There are now numerous Stafford Clubs in Great Britain and others in many parts of the world. I feel certain that for Staffords to have achieved such a high realm of popularity from that tiny start in the mid-thirties is an outstanding and almost unbelievable feat well worth recording.