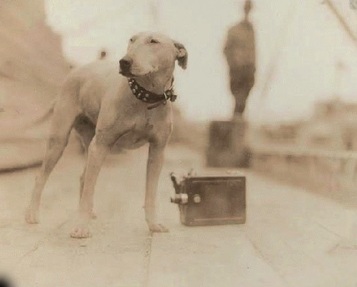 Patsy Ann.
On the following day, a small crowd watched as her coffin was lowered into Gastineau Channel just a short distance from where her sculpture now sits, watching and waiting with eternal patience, whether shrouded in fog, bathed in sunshine or covered with snow.

Because of her unerring sense of the imminent arrival of each ship that visited Juneau and her faithful welcome at wharfside, Juneau Mayor Goldstein dubbed Patsy Ann 'Official Greeter of Juneau, Alaska' in 1934.

Patsy Ann was stone deaf (from birth) but she somehow 'heard' the whistles of approaching ships, long before they came into sight and headed at a fast trot for the wharf. She was never wrong. In fact, on one memorable occasion, a crowd was given erroneous information and gathered at the wrong dock. Patsy Ann gazed at the crowd for a long moment, then turned and trotted to the correct dock.

Between ship's visits, Patsy Ann made the rounds of her friends at local businesses. She had a vast number of friends, most of whom slipped her bits of food, including a daily candy bar from one fan. Patsy Ann was as much a fixture of beer parlors and hotel lobbies as any paying guest.

Old Juneau's Ambassador was the most famous canine west of the Mississippi, more photographed than Rin Tin Tin. During the 1930's her image adorned post cards sold by curio shops and for many visitors, she was the highlight of their visit to Juneau. Local author Carl Burrows published a 'little book' in 1939, simply titled 'Patsy Ann'.

Her distinctive gait slowed over the years due to rheumatism brought on by unscheduled dives into the cold waters of the Gastineau Channel and she grew overweight from the high living of the ships' cooks. Still, she always headed for the docks, on the double, whenever steamship whistles shook old Juneau's boardwalks.

Of no fixed address, Patsy Ann spent most of her nights in the Longshoreman's hall where, surrounded by kindred souls, she could run safely down the alleys of her Bull Terrier dreams. Fittingly, it was there she died gently on March 30, 1942. The next day, a crowd gathered as her tiny coffin was lowered into Gastineau channel. Patsy Ann captured the hearts of Juneau's citizens with her dignity, honesty, and devotion to her duties as 'Official Greeter of Juneau, Alaska'.

Fifty years after her death, her statue was commissioned by the 'Friends of Patsy Ann' and installed on the wharf she knew so well. Sculpted by New Mexican artist Anna Burke Harris, clippings of dog hair from all over the world were included in the bronze at the time of casting, symbolically uniting the spirit of dogs everywhere. On July 3, 1992 at 7:30 p.m. Patsy Ann, in her new incarnation, was presented to the world under blue skies with a balmy breeze in the air.

Each year, hundreds of thousands of tourists visit Juneau from cruise ships and are welcomed on the dock by Patsy Ann, as they would have been in the 1930’s.

They are encouraged to 'greet her and touch her and in leaving, carry with you the blessings of friendship through your life's journey'. 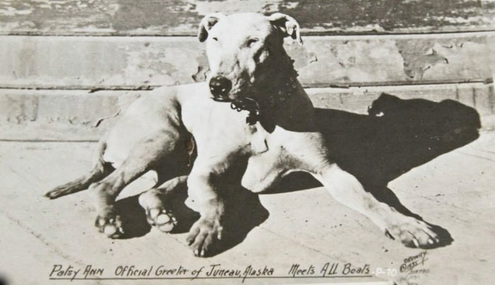