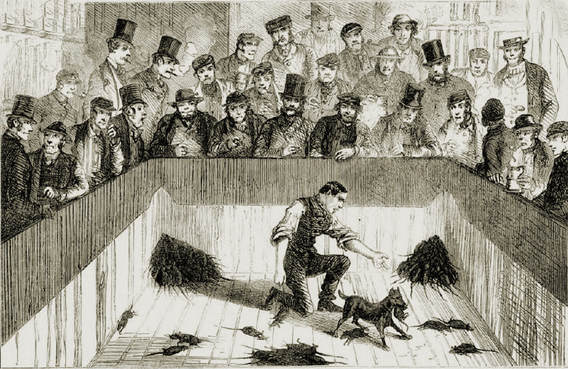 Ratting at the Graham Arms, London.
Of all the baiting sports which have now been made illegal, I only regret the passing of rat pits. For one thing, I hate rats and anyhow their end was extremely sudden. For another I love to see a good dog kill rats and I have caught them for a hobby since I was a lad.

My dogs have always worked with ferrets and would have been of very little use in the rat pit, which required a rather specialised technique. And some of the results were astounding. The main thing was to have a dog which could kill rats more quickly than his rivals. As proof of the pudding, a specified number of rats would be loosed in the rat-pit. This was the same pit which was used for dog fighting, cock fighting, matches between dogs and monkeys and similar forms of entertainment. It could be either round or square and was boarded to a height of two or three feet. If it was a square pit, bits of metal had to be nailed at the top of the corners because the rats were quite capable of climbing up these if not prevented.

When all was ready, the stakes paid up and the bets made, the rats were turned into the pit and the first dog brought along. He was held where he could see the quarry, his handler waited a favourable opportunity when the rats were placed as he wanted them, and dropped his dog into the pit. The match had now begun and the timekeeper started taking the time.

If the pit was square the rats would bunch in a corner but if it was round they would form into smaller groups, one way suiting some dogs and the other way suiting the rest. The moment the dog touched the pit he started killing rats. He did not bother to pick them up and shake them but just gave each one a hard bite and left him for the next. The dog which liked the square pit would slip quietly up to the bunch in the corner and begin to pick off the nearest rats to him. Any which tried to break from the bunch were nipped as they passed and he would not have much running about to do, if be was clever, until all but a few were killed.

He would work rather like a sheepdog keeping a flock bunched to be brought out singly for dipping. If. the pit was round, the dog would get the rats on the move and remain more or less where he was, just picking them off as they passed. This continued until the last rat was caught, when the dog was picked up, which was noted by the timekeeper as the end of the performance for that dog. This was where the wrangles used to start. The side which owned the dog claimed all the rats were dead and the side which had backed against the dog said some of them were still alive.

The point was that a good Terrier did not waste time by shaking rats. He simply snapped them and one good grab stopped the rat all right, though sometimes it only broke his back, which left a bit of kick in him though he could not crawl away. The method of deciding if he was technically 'alive' was a bit rough and ready. He was picked up and put in a chalk circle about as big as a dinner plate.

Someone, who had backed against the dog and was therefore interested in proving the rat alive was given a bit of wood rather like a grocer's butter-pat. The rat's tail was then smacked sharply with the edge of this piece of wood, which must have been distinctly painful to any rats which were physically alive, whether they were technically dead or not. If they were able to wriggle out of the chalk circle, when thus "encouraged", the verdict was that the dog had not killed them. If, on the other hand, they were too far gone to be persuaded to bestir themselves they were technically dead whatever they felt about it.

What happened if they were alive depended upon the articles under which the match had been made. Sometimes it was stated that, in the event of any rats remaining alive after the dog had been picked up, that dog was disqualified. At others he merely had to be put back in the pit, where he was re-timed until he had disposed of all his quarry.

Occasionally it would be stipulated that the dog could only have one bite at any rat and that if he touched him after once putting him down he lost the match. I have often wondered how these rat pit Terriers would work with ferrets. I imagine that there would be complications at first, because they would not know where to stand so as to give the rats room to bolt clear of the holes, and the ferrets would be in imminent danger.

Conversely, a dog used to ferrets would race into a bunch like a bull in a china shop, scatter them all over the pit so that it would take longer to catch up with them than it would take a trained dog to kill them. That was how the rats were actually killed when a dog was put in the pit with them, and obviously a great many rats would be needed for a match since these specialist dogs could kill at a simply phenomenal rate.

For instance, I have an advertisement for a match at the Westminster Pit on May 15th, 1825. Billy, a very famous dog of his time, was matched to kill 100 rats against, The Kentish Bitch, which was almost equally famous. On this particular occasion the official rat-catchers for the pit had failed to provide the requisite 200 adult rats so that the match had to be declared 'No-Go'. The result with the rats available was that Billy disposed of 90 in 7 minutes and The Kentish Bitch killed 65 in 8 minutes 45 seconds. Which was a pretty good performance.

Another time this same Billy was matched to kill 100 rats at the Cockpit in Tufton Street in twelve minutes for 20 and bets. The floor of the pit was whitened, to give him every chance, and he had stopped the last one kicking within 7 minutes 30 seconds. And so it goes on. I will not be dogmatic as to what dog got the world's record, for the contemporary accounts I have been able to trace have not been complete, but this dog Billy once killed 100 in 5 minutes and 30 seconds, which must have taken some beating. Certainly no dog of his day could hold a candle to him and when he was 5 or 6 years old, in June 1826, he killed his hundred in 8 minutes against a young dog which took 12 minutes and was still considered very good.

I have been told that the greatest feat in the world was when a Liverpool dog killed 1000 rats in under three minutes over an hour, but I have no documentary proof of this and I would not like to vouch for it. In any case, I should be extremely proud to own a dog which could kill his hundred rats in any reasonably short time, for it would certainly demand plenty of stamina and guts. But rats are not easy to get in such quantities.

In addition to straight matches for which dog could kill a certain quantity of rats quickest, irrespective of the weight of the dog, it was common to have handicaps based on weight. The Champion Billy, which was white but for a patched head, weighed 27 lbs and had fought in the dog pit and baited bear besides his wonderful performance in the rat pit. As time went on, however, rats became difficult to obtain in such numbers and it became fashionable to run handicaps. These were arranged so that the heavier the dog was the more rats he had to kill. Various handicaps were set ranging from one rat being added to a dog's quota for every 3 lbs additional weight over his rival to a rat for every pound. This was perhaps the favourite, and it was frequent to arrange a handicap where each dog had to kill as many rats as there were pounds in his weight, the dog disposing of his quota the quickest being the winner.

For instance, a ten pound dog would only have to kill ten rats while Billy killed 27. This put rather a premium on small dogs and breeds were developed specially for this sport. The little smooth Black-and-Tan Terriers of Manchester and the rough Yorkshire Terriers were particularly good for this sport and a friend of mine owns a picture of three famous Terriers ranging in weight from 5 lbs to 7 lbs. That dogs so small were game enough to kill large rats at all always surprises me. That they could kill 20 in less than 3 minutes seems nothing short of miraculous.

Occasionally freak wagers were made. Dogs would be matched to kill a given number of cats in a covered pit. Once there was a famous monkey called Jacko Maccacco which was matched against famous fighting dogs. I have a contemporary print of him performing at the Westminster Pit and he is gripping the dog round the neck with his arms and tearing at his entrails with his feet. The most fantastic challenge of all was made by old Sam Wedgebury, a famous setter of the time who handled one of the dogs which fought the lion at Warwick. He backed his son, Young Wedgebury, a lad of under 12, to kill rats quicker than any 241b dog. I once saw Hairy Kelly, our local rat catcher, kill a tethered rat on a pub table by biting it, but speed was by no means the essence of his show.

Taken all in all, I regret the passing of rat pits very much. They did not go as early as other baiting sports, party because they were less conspicuous and partly because there was no general sympathy towards rats. There is, fortunately, a passable alternative which is encouraged by the powers that be. When ricks are threshed after Christmas there are often a lot of rats in them. Persuade the farmer to allow you to surround the rick with 1" wire-netting and take your dogs when the rick is getting low. If you catch between 50 and 100 in an afternoon you will have had some good sport. Then go home and dream of the dogs which could kill as many in five or ten minutes. 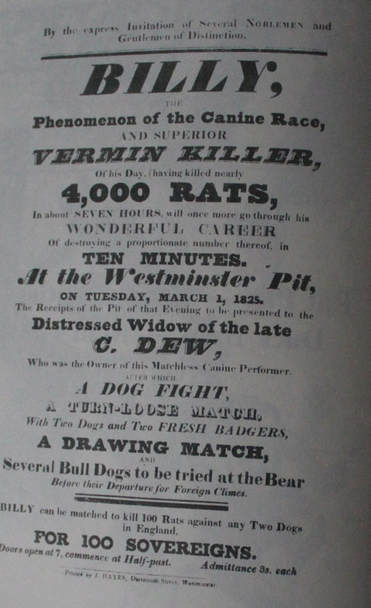