A Dutch tale - Bull Terriers in the Netherlands

It's not exactely known when the first Bull Terriers came to the Netherlands but the first officially registered one was called Trentham Squire (31-12-1889), bred by S. Fielding of Trentham and imported by mr. Blok of Amsterdam. However, according to the Dutch writer L. Seegers (Hondenrassen; oorsprong, geschiedenis en ontwikkeling in Nederland - 1912-1914) the first breedings of the (Hinks) Bull Terrier in Holland happened in the second half of the 1880's by F. Kerstens and A. Nielsen, owner of sire Lord Calthorpe. A few offspring of Lord Calthorpe were being showed during the early 1890's.

​Dutch newspaper ads from the 1880's and before tells us that Bull Terriers occasionally were offered for sale, both white as coloreds...taking into account that the colored (new type) Bull Terrier didn't exist till the early 1900's, these ads probably concerned the old type Bull Terrier...

Although the white Bull Terriers were not very popular among the general public, they were regularly present at shows and now and then advertisements appeared in local newspapers. Actually it remains fairly quiet about the breed the next following years..
Times are about to change in 1934 with the import of two colored Bull Terriers by H.K.F. Cohen (Van 't Donarspan), Wuggins Wiseacre and Welkom in Holland. They came from R.H. Glynn, famous English breeder and author of 'Bull Terriers and how to breed them'(1937). Wuggins Wiseacre (Gardenia x Red Queen) was a grandson of the famous Lady Winifred and proved to be of great quality. In 1934 he sired his first Dutch colored litter and became Champion in 1936. His daughter Red Queen of Roem Terrier Farm, born in 1935 out of Wuggins Wardress became the first Dutch colored female Champion in 1938.

Januari 1936 the Dutch Bull Terrier Club was founded, mainly by Cohen, C. Langhout (Urtica's) and Ms. Jongeneel, who won Champion titles in 1937 with Bodyguard Grock and with Gazur Gill in 1939.

Some names we come across during the years prior to the war are Arab van Carnicla, owned by R. van Veen, Arrow van Carnicla owned by H. Boer and Ghost Train of the well-known breeder J. des Tombe. 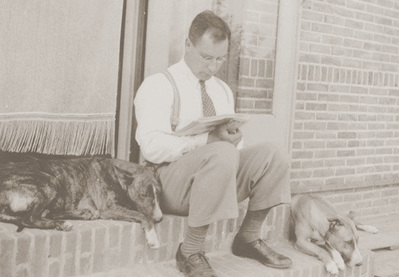 The late Dr. Cohen (1901-1977) founder of the Donarspan kennel with Welkom in Holland & Wuggin's Wiseacre.
By a number of good imports in the early 1930's, the level of the coloreds became of better quality than the white ones. Unlike England, where the coloreds also became more familiar but seldom became prize-winners...Under the heading "Kennelclub show - Many colored Bull Terriers, but the whites win"(Tentoonstelling van de Kennelclub - Veel gekleurde Bull Terriers, doch de witten winnen. Algemeen Handelsblad, october 1932), a Dutch newspaper mentioned that all winning Bull Terriers are white but that the rise of the coloreds is noticeable and probably also for the better in order to improve the all white strains which often suffered from hereditary deafness.

By the outbreak of WWII, the development of the Bull Terrier in the Netherlands more or less stopped. Breedings occurred and exibitions were held but because of the harsh times the enthusiasm was clearly less.

Nevertheless, during a highly succesful exhibition at Nijmegen on august 29, 1943 there were 6 Bull Terriers present and Brendon Broker, owned by C. Staal, became Best of Breed. A year before the liberation, at Apollo Hall, Amsterdam, the 18th Winner show was held, as many as 11 Bull Terriers have been judged, a Dutch record at the time. Also in 1944 Arrad van Carnical became Dutch Champion.

The first 10 years after the war there was not much breeding and a few dogs were imported from England, some postwar Champions are Urtica's Donald (1952), Urtica's Iwan (1954) and Urtica's Laughing Cavalier (1957) all bred by C. Langhout. Romany Rocking Horse (owned by mr. Rijven of Blue Rascal kennels) and Romany Roundel both achieved a Champion title in 1952, just as Souperlative Donarspan (bred by H.K.F. Cohen) did. Romany Rimmon, another English import bred by ms. Williams becam Dutch Champion in 1959.

The Bull Terrier has never had a large following, it was a dog of the happy few but in the late 1950's there seems a noticeable increase in popularity. Probably due to Nico van Landewijk, who wrote an article in a magazine (Libelle) about Bull Terriers: "The Bull Terrier attacks tigers, but also watches your child for hours" (De Bull Terrier vliegt tijgers naar de keel, maar past ook uren op de baby). Van Landewijk was a great devotee of the Bull Terrier and got his first one from C. Langhout in 1941. Although at times he kept and bred other breeds also and later became involved in Caucasian Ovcharka's with his wife E. Dodsworth, he always owned one or more Bull Terriers. His most succesful dog was Silver Gauntlet of Geham (03-08-1976), an English import which in fact became the foundation bitch of his kennel (of Crayke). He died in 1993 and after about 60 years of involvement in Bull Terriers, Dr. Langhout died in 1994. 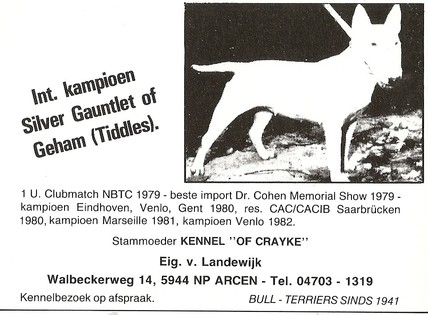 In 1960 Kingsfarm's kennel was founded by J. van Iperenburg, who proved te be a valuable asset to the Bull Terrier world. He bred several quality dogs, including Kingsfarm's Bonny Boy, which was out of the second breeding of his English import Romany Rubenella and Romany Regiment, owned by mr. Rijven of Blue Rascals kennel). The first litter of this combination also produced a Champion, Kingsfarm's Amalthea. Another important import done by Kingsfarm's was Iceberg of Lenster, born in 1971 out of Uglee Snow Blossom, sired by Harper's Howda of Lenster. At the end of the 1990's the prefix Kingsfarm's was acquired by H.M. Konings of Roosendaal, they breed Bull Terriers to this day. Some dogs they produced, Kingsfarm's Landlord Higgens (Shadowmaster to Bullorrties x Chacoriki Boogie Woogie Woman) and  Kingfarm's Black Pearl (Quest Thunderstruck x Chacoriki Zinsi) which became Best Bull Terrier of the Continent in 2002. Unfortunately, shortly after the kennel name was taken over, mr. van Iperenburg died in 1999.

In 1960 Kingsfarm's kennel was founded by J. van Iperenburg, who proved te be a valuable asset to the Bull Terrier world. He bred several quality dogs, including Kingsfarm's Bonny Boy, which was out of the second breeding of his English import Romany Rubenella and Romany Regiment, owned by mr. Rijven of Blue Rascals kennel). The first litter of this combination also produced a Champion, Kingsfarm's Amalthea. Another important import done by Kingsfarm's was Iceberg of Lenster, born in 1971 out of Uglee Snow Blossom, sired by Harper's Howda of Lenster. At the end of the 1990's the prefix Kingsfarm's was acquired by H.M. Konings of Roosendaal, they breed Bull Terriers to this day. Some dogs they produced, Kingsfarm's Landlord Higgens (Shadowmaster to Bullorrties x Chacoriki Boogie Woogie Woman)and  Kingfarm's Black Pearl(Quest Thunderstruck x Chacoriki Zinsi), which became Best Bull Terrier of the Continent in 2002. Unfortunately, shortly after the kennel name was taken over, mr. van Iperenburg died in 1999.

At the end of the decade another Dutch kennel was established, Polytelis. Founded by J. Bouma and litterally ready to conquer the world, Thanks to Bouma, who bought his first Bull Terrier already in 1958, the 'Dutch' Bull Terrier got world fame with the birth of Polytelis Silver Convention in 1980. He was sired by the English import Steadfast Thomas of Hardra, out of Polytelis Hopelessly Devoted and became one of the most influential stud dogs ever.

​He sired over 30 Champions in Europa and the United States were Maggie Burns of Iffinest kennels went with three of her bitches to the Netherlands to breed them with the Silver Convention. He also won many titles: International Champion, Agates Trophy 1981, Cohen Memorial Trophy 1981 and Studdog Trophy 1983-'84-'86-'87 and '89.                                                 Besides the titles he was a great producer, to name a few of his long list of progeny: Iffinest Local Hero (1983), out of Iffinest Abbondanza; Polytelis Liberty White, out of Polytelis Dainty Darling; Brubaker vd Alte Veste (1986), out of Undine vd Alte Veste and Mozes Goldisis, out of Holysmoke of Goldisis.
​Mozes also proved itself a quality dog and won the Cohen Memorial Trophy in 1985, the Agates Trophy in 1986 and became Dutch, Belgian, German and International Champion. Another Dutch topdog which sired many good offspring, like Didimos Carmencita, out of Didimos v. Zur Wenselen, Dionysisch Rio, out of Dionysisch Mother Finest and King of Serious Desire, out of Dionysisch Face. Goldisis became a temporarily succesful kennel at the end of the 1970's and into the '80's.

The Polytelis kennel can be considered as the most succesfull kennel between the 1970's and 1990's, culminated with the rise of Polytelis Silver Convention in the 1980's. Sadly, mr. Bouma died at too early an age in 1995.

Some other interesting breeders of the late 1980's/ '90's were S. and W. van Sloten of Dionysisch kennels. During the early '80's they also imported the first American Staffordshire Terriers with H. Stelwagen of the famous Deofol kennels. With him they founded in 1985 the American Staffordshire Terrier Club of Holland. Certainly worth to mention as succesful breeders are J. Silder of Chacoriki and family M.Y. van den Broek of Off Daikini Bull Terriers. Both these kennels produced many great offspring during the last 20 years.

Today, the Bull Terrier isn't as popular as for intance the English or American Staffordhire Terrier, but the breed has its fanciers but caution is required, they are prone to certain hereditary problems. Especially heart- and kidney diseases deserve attention and also the head leads to increasing extremes. It remains a breed of extremes, you love it or you hate it.