Background of the breed (by T.J. Horner)

In order to appreciate to the full every implication of the standard it is necessary to know a little about the background of a mixture of the old fashioned Bulldog, the White English Terrier (now extinct but resembling a Manchester Terrier in all but color), the Dalmatian and possibly one or two other breeds, with the Bulldog and Terrier characteristics predominating and still making their presence felt today.

We must thank the Bulldog for the Bull Terrier's courage and determination, his substance and heavy bone, his barrel ribs and deep brisket, the strong jaws and the fine closed coat. Also for the brindle, red, fawn, and fawn smut and the black and tan colorings and possibly for obedience.
We must, however, blame the Bulldog for certain undesirable features of body, legs and feet that have bedeviled the Bull Terrier throughout his history; for the over-broad skull, undershot jaw, round eyes and also for the Dudley nose and other faults of pigmentation.

White English Terriers were refined Terriers which gave many points indicative of quality, the small dark eyes, neat ears, varminty expression, the clean outline, with straight legs and cat feet, tight shoulders, well bent stifles, low set hocks and the whip tails, together with agility, intelligence, and the pure white coat. But from the Terrier the breed also derived a tendency for lightness of build, light bone and the excitability still sometimes encountered.

Conformation was improved by the use of the Dalmatian whose leggier type, good legs and feet and movement can still occasionally be recognized in the Bull Terriers of today. Here again there were disadvantages as no doubt the ticked coat came from this source and perhaps also the mild expressions still found in the breed.
Bull Terriers reminiscent of all these three types are still to be seen, all of them complying with the somewhat broadly based requirements of the standard and all acceptable and useful for correcting exaggerations of type or deviations from the Standard.
Thus the Bulldog type will give substance, the Terrier type will add quality and agility and the Dalmatian type improve conformation and movement. Excess of any of these types is undesirable, the ideal being a blend of the good points of all three.

Soundness as it refers to dogs has never been precisely defined. In Bull Terriers it refers to the general skeletal and muscular perfection as laid down in the breed standard

The Bull Terrier is an English breed of dog. Its predecessors were developed for the purposes of pit fighting, in the middle of the 19th century. The 'sporting enthusiasts' of that time loved to bet on dog fights, bull fights, bear fights, etc. Some of them decided to mate two formidable breeds of dog, the Bull Dog and the Black and Tan Terrier (which is now extinct). They wanted to combine the Bull Dog's tenacity, courage and high threshold of pain, with the Terrier's lightening speed, agility and unsurpassed ratting (killing) instinct. What resulted was an extremely rugged dog, well suited for pit fighting, which is still popular in parts of the world to this day. It was not a pretty dog. It had bowed legs, and its colors have been described as 'smutty'. It was called the Bull and Terrier dog. On the other side of this not so pretty picture, is the fact that the dog had unfaltering devotion to its owner.

It got the reputation as 'the gladiator of the canine race', a juggernaut in a fight and would fight to the death for his master. Some of the owners of this breed found other uses for the dog as well. They used it for sheep herding and hunting, as well as vermin control. Mr. James Hinks of Birmingham, England, decided to cross another dog into the gene pool of the Bull and Terrier, that of the White English Terrier. He thought that the gentlemen of the day would enjoy a distinctive looking and loyal companion as well as a bodyguard. The result was an all white Bull Terrier, refered to as the 'White Cavalier'. The White English Terrier is another distinct breed that is now extinct, but its genes are being carried by the Bull Terrier to this day. Other Bull and Terrier breeders also utilized the 'White Cavalier' in their breeding in order that the colors of their dogs would become more defined. This also gave the Bull and Terrier a more elegant line, a little more graceful in bearing, and the legs were no longer bowed. It seemed that Mr. Hinks decided to add in few other ingredients into the genetic make up as well. The Dalmatian, Greyhound, the Spanish Pointer, Foxhound and the Borzoi were used. The Bull and Terrier went through many changes at the hands of Mr. Hinks and other breeders, on its way to become the Bull Terrier we know today.

The colored Bull Terrier in the US (judged seperatly in the States !!) gained recognition as an AKC variety in 1936. The colored Bull Terrier was a result of the outcrossing of the Bull and Terrier breed with the Staffordshire Bull Terrier. It may be important to realize that the white color is a dominant trait in this breed. White crossed to white produces white puppies.

In the US, in 1987, the Bull Terrier gained quite an audience when Spuds MacKenzie made 'his' debut in the Bud Light commercials for Anheuser-Busch Beer Company. What some people didn't realize was that Spuds was a she. Mostly, these sets of commercials just showed that some people have no sense of humor. 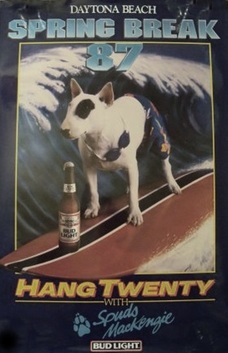 The breed dates back to about 1835. It is almost unanimously believed that it was established by mating a Bulldog to the now extinct white English Terrier. The results were known as the 'Bull and Terrier'. Some few years later, to gain size, this dog was crossed with the Spanish Pointer, and even to this day evidence of Pointer inheritance is seen occasionally.

Then about the year 1860 fanciers decided that an entirely white dog would be more attractive, so James Hinks produced an all white one which was taken up enthusiastically by young bloods of the day as the most fashionable dog.

It was a dog for sportsmen in times when life in general was more strenuous and of rougher, coarser fiber - when dog fights were allowed and well attended. As fighting dog or 'gladiator' of the canine world, such a dog had to be of great strength, agility, and courage. Withal, he was bred by gentlemen for gentlemen, for those who had a great sense of fair play, and who scorned the liar and the deceiver in any game. The dog was taught to defend himself and his master courageously, yet he was to seek or provoke a fight - and so the white variety became known as the 'White cavalier', a title which he bears with distinction to this day.

Contrary to the opinion of those who do not know him, the Bull Terrier is an exceedingly friendly dog; he thrives on affection, yet is always ready for a fight and a frolic. The preference in this country is for a well-balanced animal, not freaky in any particular, but well put together, active, and agile - a gladiator of perfect form. For many years now, the Bull Terrier has been subject of many stories passed down by generations.

Old Victor born 1869 his pedigree does not exist, but he is known to be the most important stud dog at the start of the 1870’s. Unfortunately in 1872 was found smothered to death in his bed at the Crystal Palace Show. Puss is the daughter of Hinks's most famous bitch and start of the Bull Terrier as we know it to day. Puss was born 1861 and Madman born 1863. It is from these dogs James Hinks went on to refine the Bull Terrier. His best known dogs were Madman, Puss, Wasp, Nettle and Turk. There is no record of James Hinks ever fighting his dogs.

James Hinks passed away at the age of forty nine years in 1878 of bronchitis which at the time was epidemic. James hinks exhibited his Bull Terriers more then eighty times in less then ten years and breed seventeen breeds. His sons James Hinks, Frederick Hinks and Clayton Hinks all followed their father’s foot steps, showing the bull terrier, which was what there father had created. Son James attended all seventy of the Birmingham shows and died in 1936. Clayton Hinks also attended the Birmingham shows with his Bull Terriers, his best known 'White Surprise', and died in the 1960’s.

Remarkably, Mr Hinks' son James continued to breed the Bull Terrier after his father's death, as did his son Carleton until his death in 1977.​