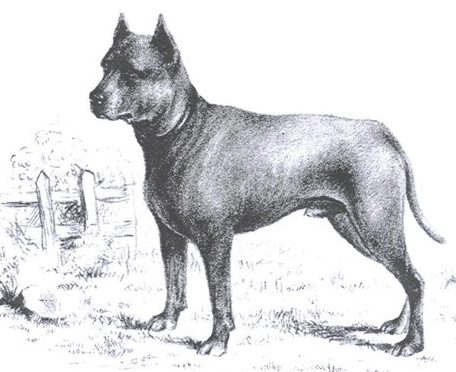 Just like many regions in Britain, Scotland also had his own type of fighting dog strain. They were called Blue Paul or Blue Poll and their color mostly was blue or blue brindle but also known were red dogs...they were called Red Smuts.
Where these dogs originally came from is not quite clear but besides their weight and height they showed much resemblance with the Staffordshire Bull Terriers. Their name was derived from the tale of the Scottish - American sailor John Paul Jones (1747-1792). The tale tells that Jones came visit his hometown, Kirkcudbright (south west coast) around 1770 and had with him this type of fighting dogs. They were frequently used as fighting dogs by the Gypsies of the KirKinTilloch area, East Dunbartonshire, Scotland. According to them their fighting dogs originally came from the Galloway coast (south west coast of Scotland, just as Kircudbright, Jones' hometown), so that would confirm the tale of John Paul Jones and his Blue Paul dogs.

The now extinct breed (or type) was around 50 cm height, strongly, muscular built with a large and broad skull. Weight, approximately 20 kg. Coat, short and smooth. Particularly to these dogs was, that they have a very special expression on their face, which you see in fact at no other breed.
According to judge J.B. Morrison, the last Blue Paul is exhibited at the late 1880's.
Praised for their fighting skills and gameness, they also were mixed with other strains, like the Staffordshire fighting dogs. Nowadays we see the blue color in the Staffordshire Bull Terrier, American Staffordshire and the Pit Bull. Although the blue color can be heredity present in some strains within these breeds, the last few years it seems blue is magic...everyone wants blue but one should never breed for colour alone...it always should be subordinate to health, performance and psyche!

The following extract on the Blue Paul is from the book 'History of the American Pit Bull' (1979) by Wayne D. Brown:

"Many people claim that the Blue Paul is extinct. He may be extinct in his
pure form, but they were probably crossed with The Pit Bull Terriers in
England and Ireland, and the Pit Bull Terriers were brought to America from
Scotland. In 1857, McCaffrey imported the dog Spring from Glasgow, Scotland
to America. At that time Glasgow was the center of Blue Paul activity, as we
have seen. In 1858, in Rhode Island, Spring won a fight in 1 hour, 35
minutes. In 1859 he won a fight in 2 hours 15 minutes. In 1860, in Boston,
he beat Tom Story's dog in 2 hours 40 minutes. Spring was bred to Maid of
Erin, who was an imported pregnant dog from Dublin Ireland and produced Young
Spring. Young Spring won a fight in 1 hour 15 minutes. In 1862 he beat
Sheffield George's dog in 3 hours 17 minutes, in New York. When Spring was
bred to John Mahon's imported pregnant dog he produced Jeff who won a fight in
Providence, Rhode Island in 1 hour. He later won against miller's dog in 1
hour 10 minutes. In 1864 he won another fight in 1 hour 10 minutes. thingy,
another son of Spring, won a fight against Spring's Hope in 1 hour 17
minutes. Power's Violet was imported to America from Scotland by her
Scottish owner and, on January 10, 1892, beat a dog named Spright in
Massachussets. They fought at Catch weight which usually indicates large
dogs. Her size, plus her name which indicates a dark blue color, leads to
the possibility that she might have been a blue paul."