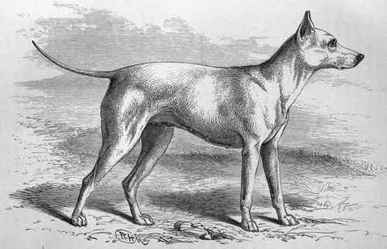 W.J. Tredinnick's Puss (May'hew's Victor x Steel's Puss).
The Bull Terrier is understood to be the produce of a cross between the Bulldog and the Terrier, but it is generally admitted that there are other elements in the Bull Terrier of the present day. What the source of those elements may be, whether the Greyhound, Pointer or Foxhound, we can only suspect in the absence of direct proof. The Bull Terrier is noted for its beautiful form with great substance and its innate attachment to everything domestic, which, with its indisputable pluck, makes
him a most excellent companion. Although the fashion of testing his courage by pitting one against another has ceased to exist, we still expect to find in him all the essential attributes of the "'fighting dog', as the breed is judged by that standard. Stonehenge commends the Bull Terrier as a vermin dog and I agree so far as work above grorind, but for going to earth, my experience has told me he is scarcely suitable, for if the game be fox he will invariably prove 'too hard' for
Reynard and on the other hand, if it be badger or otter', he will stick so close to his work that he will be placed hors de combat for many a day, even if nothing worse happens to him. The Bull Terrier, like all other breeds of dogs, has been greatly improved in general appearance since dog shows have become so general, for now, instead of having a variety of types, colours, and sizes, some of which were far from prepossessing in appearance, we have one recognised type and colour, which has found favour with many gentlemen who would never think of possessing a specimen of the smut, brindle or patched varieties. The late Mr. James Hinks, Birmingham, will long be remembered as one who did more than any other individual to improve the Bull Terrier and many of our best specimens bear testimony to that fact, as they date from his strain. There are two strains that
breeders go back to for pedigree, one known as that of a celebrity called Madman and the other Old Victor, both of which passed through the hands of the late Mr. Hinks, but the latter is the fashionable blood of the day.

The best of the celebrated Old Victor's descendants now living is the stud dog known by that name, to be found among the team left by the late Mr. Hinks, and the Champion Bull Terrier Tarquin (late the property of Mr. Vero Shaw and now owned by Sir Wm. H. Verner, Bart.), a grandson of Old Victor.

​Breeders should not go too much for great weight in the large-sized specimen. I consider 45lb. quite large enough for any specimen, especially for exhibition purposes, as when we get above that weight we lose more important detail, such as formation of skull, tightness of lip, straight legs, and symmetry, points which should not be sacrificed to get weight. The best sizes for exhibition purposes are 16lb, 20lb, 25lb and as near to 45lb. as can be. I do not mean to say that a pound or two
either way in the large-sized specimens would be objectionable, but the nearer they can be bred to the weights named the better chance of their success upon the show bench. I adopt the points as given by Stonehenge, which are worthy the attention of all interested in the breed.

The skull should be long and flat, wedge shaped, i.e, wide behind, with the smaller end at the place of the brow, which should not be at all prominent. The line from the occiput to the end of nose should be as straight as possible, without either brow or hollow in front of the eyes. This line is never absolutely straight, but the nearer it approaches to a straight line the better. The skull should, however, be 'broken up', but not to anything like the same extent as in the Bulldog.

Face, eyes, lips and teeth.
The jaws must be long and powerful, nose large and black. Eyes small and black, with black edged eyelids for choice. The upper lip should be as tight over the jaw as possible, any superfluous skin or approach to chop being undesirable. The under lip should also be small. The teeth should be regular in shape, meeting exactly without any deviation from the straight line. A pig jaw is as great a fault as being under hung.

The ears are always cropped for show purposes and the degree of perfection with which this has been accomplished is generally considered. They should be brought to a fine point and exactly match. In their uncropped state they vary a good deal in shape, and seldom reach their full proportion till after teething.

​The neck should be rather long and gracefully set into the shoulders, from which it should taper to the head, without any throatiness or approach to dewlap, as in the Bulldog.

​Shoulders and chest. The shoulders should be strong and slanting, with a wide and deep chest, but the last ribs are not very deep, though brought well back towads the hips.

The back should be short and well furnished with muscle, running forward between the shoulder blades in a firm bundle on each side.

The legs. The fore legs should be long and perfectly straight, the elbows lying in the same plane as the shoulder points, and not outside them, as in the Bulldog. The hind legs should also be long and muscular, with straight hocks well let down, i.e, near the ground.

The feet are rather long than catlike ; but they should be well arched and close together.

The coat must be short and close, but hard rather than silky, though when in show condition it should shine from constant friction.

The colour for show purposes, must be pure white, though there are many well-shaped dogs of other colours. This is, however, purely a fancy breed, and as such there is not the slightest reason why an arbitrary rule should not be made, as it was without doubt in this case and it is useless to show a dog of any other colour.

The tail or stern, should be set on low, fine in bone and carried straight out, without any curl over the back.

Of symmetry this dog shows a considerable amount, all his points being agreeable to the eye of the artist. Any deviation from a due proportion should therefore be punished accordingly.

The subject we have selected for illustration is Mr. W.J. Tredinnick' s
Champion Young Puss, a well-known prize winner and a specimen
possessing the important points in great force.