The downfall of a fighter

The Staffordshire Bull Terrier of today is a reliable family dog and is very well able to live with other dogs. They tend to be very submissive towards people which sometimes give the impression of uncertainty or even weakness. Of course Staffords are not suitable guard - and protection dogs. They are too small, too friendly and have a way to much gentle nature.
However, this wasn't what they were bred for, Staffords were pit fighting dogs and badger hunters and the question is, are they still capable of doing such work...Well, the answer is clear,  the majority of the (purebred) Staffordshire Bull Terriers miss the ability and the will to do such work. Breeding methods, based on social requirements, fashion and certainly influenced by judges, are responsible of the loss of the original characteristics of the Stafford.

People always have the tendency to change things and in this case not for the better. Why would someone own a fighting dog if he doesn't want him to fight? It appears that they want a breed that looks like a fighter but one without the mental features of such a dog...but still brag about their fighting abilities.
Let alone to mention what the average dog owner thinks a fighting dog physically should look like to be functional. Broad, heavy and low to the ground with enormeous heads, exaggeration is everywhere but this is not the way a (pit) fighter should look. It's pure fiction, fed by amateur breeders.

However, there still are working line Staffords which descend from tested strains...dogs which combine a healthy, strong anatomy with character. Maybe the most famous is the Dublin Red strain, founded by Willie Delaney with his dog Brindle Devil. He was bred by Harry Payne in the 1950's, out of Chelmont Grand Duchess, sired by Pal of Aveth. However there is also a story of that Delaney bought Devil on a market in London....Foundation bitch is considered Arrogant Resistance, owned by Eddy Byrnes. They produced Shanty of Dublin and Arrogant Devil which became the main founders of the strain in the United States.
Brindle Devil and Battling Beauty produced two great working dogs, Battling Duchess (Shamus McNutt) and Battling Devil (Bob Watts) which both excelled as badger dogs.
The Dublin Red strain produced many great dogs like Red Commando, Wolf Island Boy, CH. Red Warrior (Dann's Choice), Harrison's GR.CH. Big Red, Russell's CH. Red Joe and Springview's CH. Jim. 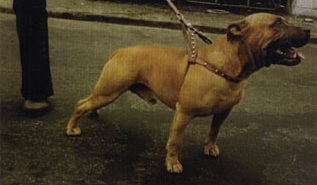 Dann's CH. Red Warrior (Dann's Choice), out of Mandy of Dublin, sired by Frazer of Ireland.
​Another well-known strain of working Staffords is the Northford/ Psycho line, however not all purebred Staffordshire Bull Terriers, these dogs are highly valued. At the base of this strain stands Glenstock Glenagow, owned by Bill Boylan. Boylan mated this male with Dealer's Delight and they produced great working dogs, including one dog named Black Tiger. Black Tiger became a well-known Irish trial dog and he produced a lot of good workers. One of his most famous sons was The Great Geronimo, which was out of Cork Rose, owned by George Hegarty. Geronimo also produced a lot of great offspring and is the great-grand father of the famous (Allen's) Ricky B's CH. Psycho, which was a result of a brother/ sister mating (Allen's Major x Allen's Molly). Psycho was not a purebred Staffordshire Bull Terrier, it's said that there was about 1/16 English Bull Terrier in him.
The Bull Terrier influence in this strain came from Haughey's North Star, produced by 2 English Bull terrier/ Stafford crosses.

The last but certainly not least to mention is the Faranee/ Evergreen strain, mainly founded by the Flynn brothers and better known as the Flynn strain. The Northford/ Psycho strain actually is an offshoot of this line that was known for its gameness.
Some dogs involved in the foundation were Brindle Tiger, Cork Rose, Lynchahaun and Faranee Lad.
​The above mentioned strains actually fall under the type 'Irish Stafford', as far as one can speak about the Irish Stafford...All Staffordshire Bull Terriers, working line or show line, are English from origin. There is no such separate breed as the Irish Stafford, it's a somewhat popular way to name working line or gamebred Staffordshire Bull terriers, however, nowadays it seems that every Stafford that has a slightly different appearance is called an Irish Stafford.