Origin: Great Britain, due to the efforts of one man, James Hinks, who crossed Bulldogs, old -type Bull & Terriers, Dalmatians and Old English White Terriers which led to the development of a refined, all white Bull Terrier. Appeared on a Birmingham dog show for the first time in 1862, in 1887 the first Bull Terrier Club was established.

​Legacy: The Bull Terrier was never ment to be a pit fighting dog, he was a show dog and today he's an appreciated family companion. He is suitable for protection work and sometimes used as a big game hunter.

Size: No size or height limits, as long as he's well-balanced. 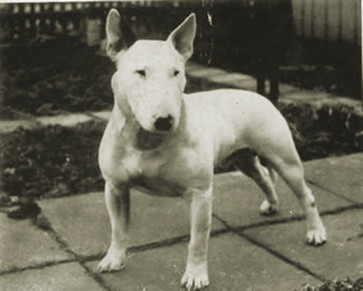 The existence of the English Bull Terrier as we know it today is due to only one man, James Hinks of Birmingham. Hinks was born in 1829 in the poor Irish Midlands but his parents moved to Birmingham in 1851 were he married and made money as a market trader and breeder of rabbits and birds. Later he also became a dog breeder and in 1865 he became the owner of the Sportsman's Ale House, a pub in Worcester Street, Birmingham. Unfortunately he got tuberculosis and died in 1878.

However the Bull Terrier is created by just one man, it's just not quite clear what breeds exactly were used. The main components consisted of Bulldog blood mixed with the Old English White Terrier and Dalmatian. However, at that time the Bull and Terrier cross already was a common phenomenon as a fighting dog so we can assume that dogs of this type also is being used by Hinks. In fact, as a dog trader he had easy acces to many types of dogs...

It's a misconception that Hinks goal was to create a 'better' pit fighting dog. He was heavily involved in showing dogs. Kevin Kane (James Hinks, Master Craftsman, 2001) states that Hinks showed his Bull Terriers during 8 years 82 times and altogether he exibited 17 dogbreeds.
Hinks owned a white Bulldog named Old Madman (Crib x Smit), born around 1855 and it's certain that this dog played an important role in the creation of Hinks' strain of all white and refined Bull Terriers . Old Madman was also exibited in Birmingham and won the first prize.  Old Madman is described as a show dog and not bred to business. He produced Hinks' Madman, out of Hinks' Puss (Rebel x Wasp) which became one of the most important ancestors of all white Bull Terriers.

The well-known story on Puss, who fought with an old type Bull and Terrier, which took place at Bill Tupper's rendez-vouz in Long Acre. At the Holborn Repository Show in 1862, dogmen of the old type assumed these new white dogs were weak  and couldn't fight, Hinks became irritated and said they could certainly fight. In order to prove his point he immediately want to set a match between his bitch Puss and a dog owned by Bill Tupper.
​
Puss killed Tupper's dog in half an hour without being wounded noteworthy herself and the next day she participated at the dog show. Due to this event the name of the white Bull Terrier was established. This story was first written by Rawdon B. Lee in 1896 (34 years after the event!). Kevin Kane (James Hinks, Master Craftsman, 2001) did an extensive research on the ambiguities in this story, which in fact influenced the whole historical perspective on the origins of the Bull Terrier, namely was the intention to create a fighting dog or a fashionable show and companion dog. The latter appears to be the fact and the story on Puss is proved to be false and based on the writing of just one man, Rawdon B. Lee, He based his story on misinterpreted stories that went from mouth to mouth...generally not very reliable as source.
The fact that Hinks used Dalmatians in his creation is also at least questionable when one's trying to improve a fighting dog and also Hinks is never mentioned as a dogfighter in that era.  Hinks' white strain of Bull Terriers were very succesful and around the 1860's - 1870's they dominated the dog shows in England. In the early 1870's Hinks withdraw from the public dog world but his strain of white Bull Terriers was established, widespread and popular. In 1887 the first Bull Terrier Club was founded and a year later the first official standard was published.

Contrary to the usually brindle color of the old type Bull and Terrier, the dogs of Hinks' strain were white. Around 1907 Edward Lyon starts to breed the white Bull Terriers back to the old typ Staffordshire dogs, initially to gain gameness because he thought they were to weak to perform. Lyon was stationed for some time in India and there he used old  Bull and Terriers as hunting dogs and therefor he wanted to improve the white strain. In fact he and Walther Tumner became the main founders of the colored variety of the new Bull Terrier breed. It's often assumed that hereditary deafness in white Bull Terriers was the real reason to start breeding a colored variety, however this is not true as mentioned above.

It turned out not so easy...the Bull Terrier was already far removed from the old (Staffordshire) type and especially the correct head appeared to be a problem. That because in the meantime, the ears, eyes and shape of the head were significantly different developed.

​However, progress was being made and in 1919 judge Count Hollender awarded the first colored Bull Terrier, Bing Boy, with a Challenge Certificate...much to the dismay of the white Bull Terrier fancy. During the 1920's the coloreds developed further and the next Challenge Certificate was earned in 1929 by Dockerill's Lady Winifred at the age of 2. In 1931 Ellis' Hunting Blondi as well as Lady Winifred again earned the Challenger Certificate at the National Terrier Club show. Later Lady Winifred became the first colored Champion 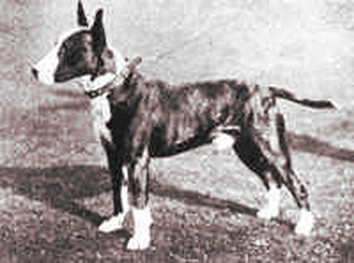 Bing Boy (Oakesford Gladiator X Stoat). In 1919 the first coloured Bull Terrier to be awarded a Challenge Certificate (CC) by Count Hollender.
Although all white Bull Terriers are also genetically colored, breeders of the white dogs didn't want their 'pure'dogs being mixed with the coloreds and according to the Bull Terrier Club whites born out of colored parents had to be euthanized. Untill the late 1930's the colored Bull Terriers didn't reach the quality of the whites but time was about to turn by the hands of Miss Montague Johnstone and Meg Williams of Romany kennels, which became very influential in colored breeding. Their first colored Champion was the well-know Romany Rhinestone (Romany Red Rufus x Romany Retrospect, 24-04-1936)...certainly a Champion who could measure the quality of the white Bull Terriers of that time. That same year brought another colored Champion, Jane of Petworth (Old Jimmy's Double x Kowhai Chita).

In 1936 Rebel of Blighty (Petworth Punchinello x Lass de Dijon) became Champion, this was a nightmare came true for the all white Bull Terrier fancy, Rebel was a 'colored bred white'...in other words, a white Bull Terrier produced by colored parents. This was exactly what the Bull Terrier Club wanted to prevent but in time this would be inevitable. Rebel of Blighty was exported to the United States, were he also became Champion. The Bull Terrier Club opened a studbook, only accessable for Bull Terriers from 4 generations of white dogs.
​
At the same time they put a ban on giving titles to white Bull Terriers of colored ancestors which lasted untill 1950. However, already in 1936 a Colored Bull terrier Club was founded by S.E. Edwards.
Today the 2 color varieties are totally accepted and the quality of the colored Bull terrier reached the same level as that of the whites. 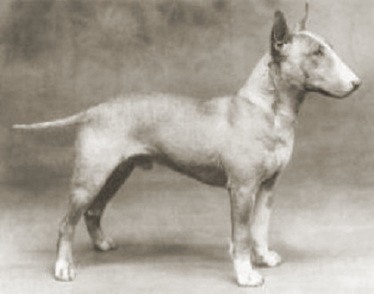 Romany Rhinestone, 1936 (Romany Red Rufus x Romany Retrospect).
​After Hinks' death in 1878, 2 of his sons, James II and Frederick kept on breeding and showing Bull Terriers and James II's son Carleton bred under the name 'Of Brum' a lot of great dogs. He died in 1977  and so is the name Hinks up to 100 years after the death of its creator remained closely connected with the Bull Terrier.