Origin: Brazil, developed by a mixture of English and Spanish Alaunts, Bulldogs, Bullebijters and Bloodhounds, brought by the Portugese and Dutch settlers. Fila's are traditionally farm and hunting dogs.

Legacy: Developed and used as an all-round worker. Suitable as big game hunter (jaguar), farm guard, tracking dog and cattle dog. Generally the Fila has a strong dislike to strangers. 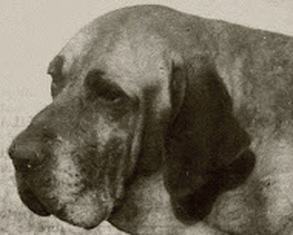 Aladim da Fazenda Poço Vermelho.
Fila Brasileiro - the story of Brazil
The foundation of the Brasilian Hunting Mastiffs, which eventually led to the development of the Fila Brasileiro, actually begins with the discovery and conquest of todays Brazil. This is a typical case of a type of dog which developed the way it did, not because of some preconceived plan, but due to circumstances, environment and needs...Through the ages they evolved as it were, by the lifes they led.

The conquistadores brought their Alano-type dogs and the harsh conditions under which the settlers lived also recquired strong dogs, able to perform very different tasks.  There was a need for skilled hunters, which also being capable of seizing their prey. These prey also includes the jaguar, itself a lethal hunter who occasionally endangered the cattle of the settlers. An effective guard dog against both animal and human predators was also required. Around 1550, when slavery began and large plantations emerged, these dogs were employed to guard and to prevent the slaves would escape.

Early developments in Brazil were mainly influenced by the Portuguese and in some extent the Spanish, also for some time by the Dutch, which occupied a part of Brazil (North-West) between 1630-1654. It's been known that the Dutch brought English Mastiff-type dogs during this period, along with Bullenbijters (German/ Dutch Bulldogs) and especially these English dogs are considered as being the main ancestors of the present Fila.

A popular version of Fila history is that of a selective breeding program which consist Mastiff, English Bulldog and Bloodhound (St. Hubert-type).  A variation on this is that these crossbreeds were bred with native wild dogs, both these theories are highly questionable.  Also the Cao de Fila da Terceira is mentioned as main ancestor which in combination with the English Mastiff produced the base of the Fila breed. However, this claim also can't be sufficiently substantiated. The Fila is defenitely a result of a kind of natural selection and not by selectively cross-breeding of predetermined breeds/ varieties.
Related breeds with a similar background are the Gran Mastin de Borinquen (Borincano) from Puerto Rico, Presa Boliviano and the extinct Cuban Bloodhound. In fact these are the same type of dogs as the Alano/ Presa dogs of Spain. Just as 'presa' means 'to hold' or 'grip' in Spanish, Fila(r) is likewise in Portuguese.

The first standard appeared in 1951, written by Paulo Santo Cruz (Parnapuan Kennel). Since 1949 he has been closely associated with the Fila and took many of the Fazendas. His foundation stock came mainly from Jose Gomes de Oliveira from Varghina and from Pedrinho do Engenho of Carmo de Minas. Some other breeders of that period who based their foundation at these blood were Ennio Monte of ABC Kennels and William Chalmers of Jaguara Kennels. Dr. Lliano Pinto Ribeiro, owner of one of the most important CAFIB kennels, Engenho Velho, got his famous dogs 'Lord' and 'Martha' also from Gomes.
Santo Cruz  based the standard on the Fazenda type of Minas-Gerais.  Eventually in cooperation with Dr. Erwin Waldemar Rathsam and Joao Ebner (Rancho Alto) the final standard was published in 1952 (Kenel Clube Paulista).
​
At that time there was not a CAFIB (Club de Aprimoramento do Fila Brasileiro) and CBKC (Confederaçao Brasil Kenel Clube). The BKC (Brazil Kenel Clube) was affiliated to the FCI and they registered the Fila's in an open registry, till 1975. That year the BKC decide it had to close its open registry. As a result new blood from the inlands couldn't be added anymore but according to the BKC there didn't exist any hidden quality Fila's anymore at the Fazendas. 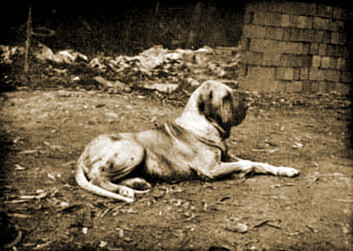 Lord, bred by Jose Gomes de Oliveira and owned by Dr. Lliano Pinto Ribeiro of Engenho Velho kennels.
​At the same time the Fila the Fila gained a reasonable popularity and became a  sort of 'fashion dog' , however, the true Fila temperament actually worked a bit disappointing and in combination with the closure of the open registry breeders begun to experiment indiscriminately, especially with Great Danes, English and Neapolitan Mastiffs: even the Saint Bernard was used occasionally. These developments have been disastrous for the breed, especially since these crossings just got pedigrees and this way they mingled among the 'pure' Fila population.

Of course this also provided the necessary criticism and the BKC responded by the opening of a special registry of experimental hybrids, however, without succes and the ridiculous happened...the standard became adjusted to the 'new' type.

In 1978, the CAFIB was founded to preserve the 'true' Fila and the BKC merged with the FCB (Fundaçao Cinológica Brasil) under the name CBKC (Confederaçao Brasil Kenel Clube) in 1980. Unlike the CAFIB, the CBKC is recognized by the FCI.
Francisco Peltier de Queiroz, Antonio Cavalho Mendez and Dr. Santo Cruz became known as great defenders of the pure Fila. The CAFIB began to analyse the Fila population (phenotype, temperament and nervous system) without making a difference between pedigree and non-pedigree dogs. Dr. Paulo Santo Cruz published about this in the O'Fila magazine (1978) and a new standard was released by the CAFIB. Later the CBKC took over many aspects in their new standard.
The first Filas came to Europe (Germany, 1954/ Netherlands, 1956), Albrecht Duke of Bayern imported some dogs from Dr. Paulo Santo Cruz, amongst them Dunga de Parnapuán. From Germany they found their way to Austria (Georg von Enzenberg, von der Schlossrinn) and after that the Fila spread troughout the rest of Europe. Unfortunetaly, the Fila in some countries or regions is a banned breed or suffers from certain limitations, as in Australia and New Zealand. In the UK, Denmark and Norway its prohibited by law to own and breed Filas and in the Netherlands they must succesfully pass a behavorial test, which frankly, is against the true nature of a Fila. Also Germany has its restrictions, depending on which region you live.
​
The question arises whether there is room in densely populated Europe for such dogs, well the answer is clear...yes. The anti-dog laws which have been introduced  the last decades are based on ignorance. These laws derive from the Pitbull problem of the late '80s/ '90s and inexplicably, the Fila also became a victim of all those 'experts' which eventually were responsible for the laws against so-called dangerous dogs. A very rare breed, scarcely known by the general public suddenly became a danger to society....

This in stark contrast to its true nature. A breed which is extreme loyal to its family, very gentle with children and makes a great family dog. The other side is a guard dog which has an innate aversion against strangers. This is why Filas only should be with people which have thoroughly engrossed themselves into the breed, not suprisingly, this seems indeed almost always the case.