Origin: Great Danes are descendants of old hunting Mastiffs, in this case, maybe more accurate described as 'running Mastiffs'. It's not clear where exactely they are originated, Denmark as well as Germany claim the breed as theirs. In time these type of dogs were known as Boarhounds, Saupackers but also as English Dogge and German Mastiff.

​Legacy: Once a fierce boar hunter, the Great Dane today is solely a family companion dog. Some are natural guard dogs and possess a very protective nature. 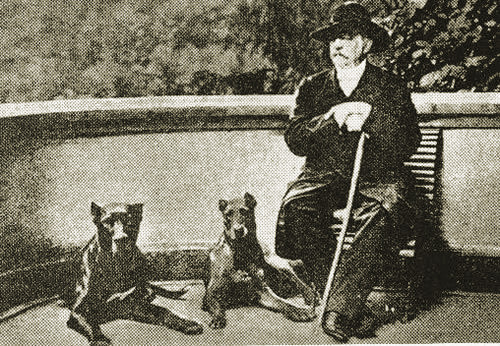 Otto von Bismarck (1815-1898) with Tyrras II & Rebecca.
The Great Dane, a German Hunting Mastiff
This giant dog evolved from large hunting dogs and was known by many names. Even today its name is still confusing. At the first significant German dog show in Hamburg (1863) there were 8 Danish Dogges and 7 Ulmer Dogges registered and up to 1877 they were separately judged. The first time that the name Deutsche Dogge appeared was at the 1878 show of Frankfurt.

The demand to be registered under one name finally became reality in 1880 in Berlin, where judges from Kennel Club Hektor, under the presidency of dr. Bodenius, decided that the breed's name has to be Deutsche Dogge. In addition the Deutscher Dogge Club was founded in 1888 and the standard was issued. The FCI recognized the breed as such in 1937. Despite the fact that today the Great Dane is classified as of German origin, a letter from 1948, written by the then Secretary General stated that the FCI takes the opinion that the Great Dane is a Danish breed and the Danish standard is the only valid one. Finally we have a breed that still bears two names, Great Dane (Grand Danois) and Deutsche Dogge. Anyway strange that a breed is named after a country (normally because of its origin) and then the standard specify its origin elsewhere...This creates confusion and division.

Interesting to note is that the AKC already in 1887 recognized the Great Dane as such but the first breed club, founded in 1889, used both Great Dane as German Mastiff till 1891, when it was changed in Great Dane Club of America, although they also take the German origin as being valid. The UK recognized the breed in 1885 as Great Dane and in the Netherlands a club was founded in 1893 which adopted the German name, Duitse Dog (Deutsche Dogge). Remarkable is that after more than 100 years, this breed in Holland is still popularly called Deense Dog (Danish Dogge).