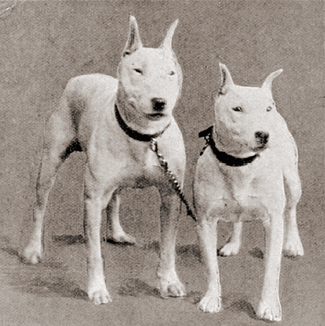 White Wonder & Sherbourne Queen, 1890's (Gully the Great x Kit).
The Hinks' Bull Terrier
The modern day Bull Terrier is changed dramatically since its 'creation' about 160 years ago. Especially the head looks nothing more on what it once was. But that's just the characteristic which distinguish him so much from other breeds...there also lurks the danger. Breeds that have their attraction due to an extremely feature will often end up lost just by exaggeration of this particular feature. The Bull Terrier is no exception.

Around the time of the creation of the Bull Terrier by Hinks, the British ruled almost complete India and Pakistan. The English brought their (old and new) Bull Terriers with them along with English White Terriers, this mixture eventually led to the Indian Bull Terrier and the Pakistani Gull Terr. Many consider them as being the original Hinks Bull Terrier. They are bred en kept as working dogs and lack the exaggerations of contemporary show Bull Terriers. 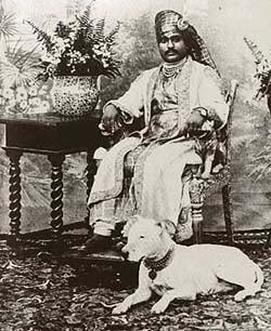 Indian royalty in colonial times.
The pure Gull Terr is almost always white and although drooping ears occur, the erect ears are a specific feature of these ancient dogs, just like the almost abcense of the stop between head and muzzle. The downface/ roman finish is not seen by the Gull Terr. They posses a smooth but harsh and thick skin. Their size is about 45-65 cm and 20-35 kg. Unfortunatly many of them suffer from deafness and skin problems are often seen.

They are very vigilant and nothing eludes them, combined with a protective nature and their dislike towards strangers, they're highly valued as guard and protection dogs.  The Gull Terr is also a celebrated fighting dog and although in both India and Pakistan bear baiting and dog fighting is illegal, these events still take place in rural areas, especially Punjab and North West Province. The bears provided for these fights are traditionally owned by the Qalandar and the dogs being used are mostly the Gull Terr or Bully Gull Terr (Gull Dong), which has been developed by Gull Terr/ Bully Kutta hybrids.

The Indian Bull Terrier is contrary to what is often thought not the same as the Gull Terr, which is taller and somewhat heavier built. They generally are around 40-50 cm and preferably white or white with markings at the head, the ears erect. Just like the Gull Terr, these dogs also are popular as fighting - and guard dogs. Skin diseases and deafness is also a common problem.
Some of these Indian Bull Terriers (or Desi Terr, as they also being called) show a great resemblance with the extinct Old English White Terrier... 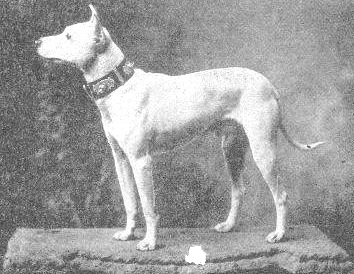 White Prince, an Old English White Terrier.
It seems that the interest in the old type (Hinks) Bull Terrier increases in recent years and occasionally breeding programs appear, aimed on the re-creation of the Hinks Bull Terrier. Some can be taken serious, while most of them dissappear again after a while.  Generally, the main goal is to create a working Bull Terrier. To go back in time, before the degeneration of the current show beast with its strange, useless head. Especially the last 20 years it goes fast downhill with the head of the Bull Terrier. Due to this development, different names are popping up as being the 'new' working Bull Terrier.

These breeding programms aside, some claim the old Hinks' Bull Terrier is still present in the shape of the Gull Terr and Indian Bull Terrier.