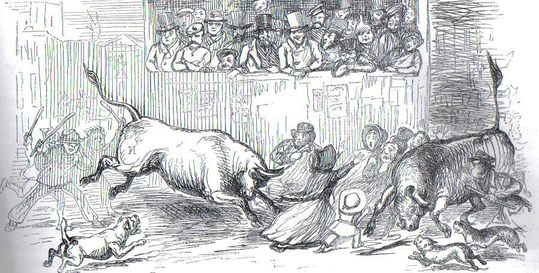 Bull-running today is by many known due to the 'Fiesta de San Fermin' of Pamplona, Spain, but also in Mexico, Colombia, Portugal and southern France we come across this type of event.

The origin of this practice is said to be at the end of the 13th century and it derived from a certain way of drive cattle from one point to another, in which youngsters, went ahead of the bulls. The spectacle which hereby created attracted public and developed gradually as a sport. Also a link with bull fights can be made, the bull became chased from its enclosure to the arena, accompanied by a lot of tumult and commotion the agitated bull try to hit the gathered crowd...a sport was created.

What is much less known, is that in Britain also traditionally a type of bull running existed, which originated far back in history. Especially Stamford (Lincolnshire) and to a lesser extend Tutbury (Staffordshire) were famous on this. Bull running can be considered to be a somewhat more a humane 'sport' as such and contrary to bull baiting, besides dogs, also humans were involved.

"Their second sport, though more ancient than the former, yet more beast-like than any: is their bull running. a sport of no pleasure, exept to such as take a pleasure in beastlyness and misschief. It's performed just the day, six weeks before Christmas. The butchers of the town at their own charge against the time, provide the wildest bull they can get. This bull over night is had in to some stable or barn belonging to the Alderman, the next morning proclamation is made by the common 'bell-man' of the town, round about the same, that each one shut their shop-doors and gates." A little further, he continue: "That none have any iron upon their bull-clubs or other staff of which they pursue the bull with. Which proclamation made and all the gates are shut up, the bull is turned loose from the Alderman's house, and then, hivie, skivy, tag and rag, men, women and children of all sorts and sizes, with all the dogs in the town promiscuously running after him with their bull-clubs spattering dirt in eachothers faces. "

When and how Stamford bull running originated is not quite clear but according to the myth of William Plantagenet de Warenne (1166-1240), the 5th Earl of Surrey, the pastime derived from an occurence which happened on november 13, 1209.

William looked from his castle walls on the estate and saw two bulls fighting over a cow. A local butcher, owner of one of the bulls, passed by with his Mastiff and sent him off on his bull in order to separate them. The Mastiff then chased the bull to town and there the raging bull caused chaos and damage...men, women and children being charged by the bull, which by now being attacked by the many butcher dogs of Stamford. The clamor and tumult also reached the castle and William hurried towards town to see what was going on. Apparently he liked the whole spectacle and he dicided to give the land (The Meadows), on which the whole thing had started, to the Stamford butchers. There was, however, one condition; each year on november 13th the butchers had to provide a bull, so that the sport could be continued.

Although possible, this story is not based on proven facts. Another possibility is that Stamford bull running is derived from somekind of bull festival in honor of St. Brice's day, which is an annual remembrance of the, on november 13, 1002 AD, massacre of the Danes in Britain, ordered by King Aethelred II (968-1016 AD). This, with a little Roman influence, which also had bull festivals, during the annual 'fugalia' festival (Tauro Vilia) and each 5 years at the honor of 'Di Inferi' (Ludi Taurii).

During St Martin's day or Martinmas as it's called, there is also an annual bull festival. In this case there is also a link to the Romans, as Martin bishop of Tours (316-397), of whom the feasts are named after, was a Roman soldier. Martinmas festivities were held following the slaughter period (Martinmas-beef) and remarkable is that this is only 2 days before St. Brice's day, namely on november 11th. It's not inconceivable that the Stamford bull running is a variation of the Martinmas bull festival and perhaps even bull baiting as such is originated around the Feasts of St. Martin. 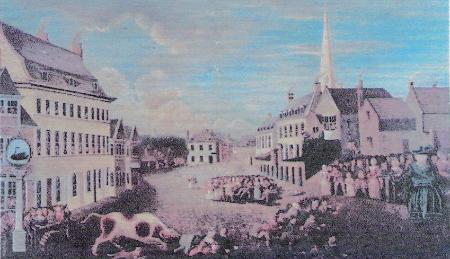 Bull running at Stamford, ca 1800.
There is written evidence of the existence of an annual bull fest at Martinmas in Stamford, dated as early as 1389.

Joshua Toulmin Smith (1816-1869) writes in his 'English Gilds' about the custom which is mentioned in an ordinance of 1389. He refers to the fact that the bull is hunted by dogs but not baited, after which it is sold and the brethren and sisters sit down to feast.

According to antiquary Francis Peck (1692-1743), the members of the St. Martin's guild 'had a bull to be used and sold for the profit of the fraternity and it appears that the brethren and sisters of St. Martin's guild had always a bull running on Martinmas day." He refers to an ordinance of 1390. This proves that there existed an annual bull fest on St. Martin's day but it's not clear whether this includes bull running also.

This very popular tradition has managed to maintain for centuries but in 1788, the first attempts by the local authorities, to ban the sport, commenced. They tried to point out the fact that such traditions don't belong in a civilized society and a proclamation was released in which bull running was appointed as being against the law, religion and nature; resulting in death penalty. Authorities were aimed at a complete abolition of this tradition.

A year after this first attempt an article appeared in the Rutland and Stamford Mercury:

20 nov. 1789: "on friday last, in open and lawless defiance of the prudent, humane and praiseworthy directions of the magistrates, a bull (clandestinely taken from mr. Charles Wright's yard in Scottgate), was run through most of the streets of this town. It ended without material misschief, though, no thanks are due to the rioters. Several persons have been submitted to gaol; and we learn, some others have absconded, and rewards are offered for the apprehending of them."

In 1833, an officer of the Royal Society for Prevention of Cruelty against Animals (founded in 1824) went to Stamford in order to prevent the annual bull running event. When Charles Wheeler (the first appointed inspector of the RSPCA in Britain) arrived in Stamford he was insulted and abused by the town mob, without succes he left Stamford.

Even after the nationwide prohibition against all forms of animal fighting, bull running keep continue. In 1836 a bull was purchased and the next day, at november 13, the bull was released at 11 o'clock in a secured street. About 5000 people were gathered and the released bull raged through the mob. At one o'clock he was put back in his stable and an hour later he was released again, now he ran to the fields, where he was overpowered by numbers. The bull was taken to town again where the mob paraded through the streets, they went demonstratively to the homes of the opponents of the sport. Then they went back to the fields, where dogs were set on the bull, which killed two of them and the bull fled into the river. After awhile the bull was dragged out by the outrageous mob, which brought him back to his stable.

As a result of this event, 8 men were convicted of animal torture, organizing a bull run and disturbance of the peace.

History tells us that in 1838 the authorities took precautions. On november 10th, the Metropolitan Police and the army were called in, in order to prevent the annual bull running with the attendant riots. They confiscate the present two bulls but despite the efforts the Stamford inhabitants managed to possess a bull and, although only for a short time, bull running went through. At Bull-Meadows, the police managed to secure the bull, resulting in the necessary riots...

In 1839, same story. Metropolitan Police and the army were present again but this year Stamford managed to get not one, but two bulls. Unfortunately, the police confiscate these bulls already the night before the 13th. Miraculously, at one o'clock the next day, another bull was released and bull running went through again...shortly after that this bull also was secured by the police and and the city again was hit by disturbances and riots. However, eventually this appears to be the final year of disorder because the following year the Stamford inhabitants in a way agreed with the abolishion of the tradition. 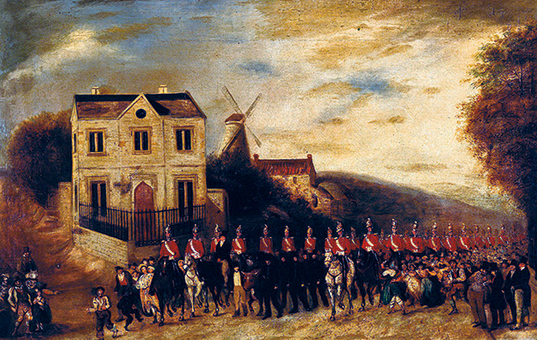 The Bull escorted by Dragoon Guards from Tolethorpe to Stamford, 1839.