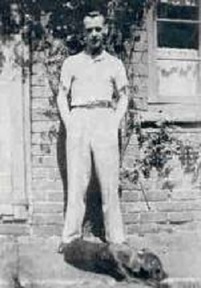 Freddy Philips & Arrogant Mac.
The origins of the Staffordshire bull Terrier have never been told. Although books were written in the 1930’s none have ever given any description of the dogs and bitches our present day dog have originated from. I know that a great deal of controvesy will start when I say; that in my opinion there was very little of the Bulldog in the make-up of the Stafford. The only thing I think compares the Bulldog to the Stafford is its courage. The old Bulldogs were more like a Stafford than the present day Bulldog, but it would be a nightmare to todays Stafford breeder if his stock looked anything like a Bulldog.

The Stafford's head should be tight without wrinkle over both skull and foreface and without any sign of lippiness. A lippy dog, if fought, would be in risk of loosing half of his face in the first few seconds of any serious encounter.The essential thing is that a dogs appearance should convey his ability to do his rightful work, even if he is never fought and only for the show.The Bulldog’s mouth is undesirable for the Stafford and the prized flews of the Bulldog are well and truly out when it comes to the Stafford. The dish face and down face, as well as the head without a stop should also be avoided.

The White English Terrier, now extinct, had all the similarities of the Stafford, other than showing great strength and power for his size. The head was as clean-cut as the Staffords but not strong enough or as deep through enough to fit a well balanced Stafford.The head resembled a wedge, were a Stafford should resemble a half brick.The skull and foreface of the English White Terrier were parallel to each other, thus avoiding either dish or down face and the stop of a Stafford should be deep as it determines the size and shape of the eye, which should be round and shallow. The foreign eye shapes appear to destroy the typical expression. Ears were small and rose shape, if they were large they were cropped. The neck of the English was longer than the Stafford without the power needed. The old-timers wanted a neck of reasonable length and great strength and demanded a crest of the neck. This permitted a wide range of vision without presenting a vulnerable target and gave the Stafford a regal stance.

​The front of a Stafford is of great importance. The legs must be set in line and squarley underneath the shoulders, with the rounded briscket lying snugly between them. The legs should be straight to the pasterns, with the feet turning out a little, this is to allow the dog to brace himself on being attacked and better able to resist being thrown, or bowled over, similar to a wrestler taking a stance. The structural efficiency was of great importance to two evenly matched Staffords.Many judges admire the great bredth of chest and shoulders and large head, without determing wether the exhibit is in balance and many broad fronted dogs have what is known as a Buul dog front with no breadth of rib- cage,and no indentation behind the shoulders into the ribs. The Stafford should be nothing like the Buuldog whose shoulders appear to be just tacked with the body slung between them.

Breeders today are trying to breed dogs like there Terrier ancestors, not like the Bulldog which they are supposed to have come from.The faults which are know so noticeable came from the Bulldog, not the White English Terrier and I state that the top line should be level, another attribute that is totaly unlike the Bulldog, who has a pronounced dip behind the shoulders with a roached back and stern higher than the shoulder.We do not want the straight stifle and hock of the Bulldog. When the Stafford is viewed from behind, the hind legs should be straight in line from hip to foot, again the shape of the Terrier with the bone of the Bulldog and without the cowhocks, which were such a feature of the Bulldog.

The Stafford is or should be a strongly built compact dog and the ones termed very square are of the ideal type.The rib cage should extend for a good two thirds of the body, with a very short space between the last rib and the hind quarters. This correct conformation gives that characteristic 'devil-may-care' gait that is so different to other Terriers, which have narrow shoulders and rib-cage and slightly longer back, making there movment like an articulated truck. Hence all that desired compactness is lost. The Stafford strike one as jaunty and very light on his feet, despite his stronge build. He should never appear to be ponderous or give the impression of which is found in the Bulldog ‘cloddy type dogs’. Terriers which we which we can persume to be part of the Staffords make up and similar to the Manchester would have been similar in type to the English White Terrier, the main difference being the colour. Liverand and black & tan were not to be encouraged. A black Bulldog is never seen, as the Bulldog’s standard bars this colour. Therfore if the Stafford came from the White English Terrier and the Bulldog, how did the black Stafford originate? After looking back at what was supposed to be the main ancestors of the Stafford, one can only assume that other breeds were also involved in his evalution. Having examined the origin of the Stafford, one moves on to his characteristics and it's from the past history that the modern day dog inherits his character of indomitable courage and high itelligence, his great affection for his friends, family, children and his total trustworthy stability makes him the foremost all-purpose dog.

The Stafford is not indiscriminately aggresive towards other dogs but if challenged usually responds with eager and brisckness and his memory is long. If he is attacked by a dog of another breed he will harbour an intence dislike for that breed in or out of the show.