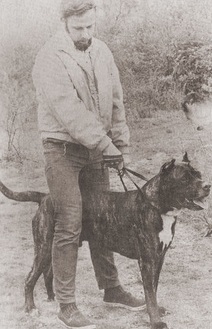 The origin and development of Bandogs is a case of a shared history of closely related type of dogs, which developed into different breeds and eventually been used to create the modern Bandog of today.

Mastiffs, Bull & Terriers and Bulldogs are all related and in fact, they are the ancestor of the current Bandog. Actually, modern Bandog breeding began in the 60's with the late J.B. Swinford who began to crossbreed (working line) Pit Bull Terriers with English Mastiffs to create somekind of superior working dog.

Around 1500 we come across the first mention of the word 'Bolddogge', as butcher's dog (Oxford English Dictionary) and W. Wulcher around that same time used the name 'Bonddogge'. William Harrison (1534-1593) described the Bandog in 'Description of Elizabethan England' (1577), chapter XV 'Of our English dogs & their qualities':

"mastiff, tie dog, or band dog, so called because many of them are tied up in chains and strong bonds in the daytime, for doing hurt abroad, which is a huge dog, stubborn, ugly, eager, burthenous of body (and therefore of but little swiftness), terrible and fearful to behold, and oftentimes more fierce and fell than any Archadian or Corsican cur. Our Englishmen, to the extent that these dogs may be more cruel and fierce, assist nature with some art, use, and custom. For although this kind of dog be capable of courage, violent, valiant, stout, and bold: yet will they increase these their stomachs by teaching them to bait the bear, the bull, the lion, and other such like cruel and bloody beasts (either brought over or kept up at home for the same purpose), without any collar to defe pleasures. Divers of them likewise are of such jealousy over their master and whosoever of his household, that if a stranger do embrace or touch any of them, they will fall fiercely upon them, unto their extreme mischief if their fury be not prevented. Such a one was the dog of Nichomedes, king sometime of Bithynia, who seeing Consigne the queen to embrace and kiss her husband as they walked together in a garden, did tear her all to pieces, maugre his resistance and the present aid of such as attended on them. Some of them moreover will suffer a stranger to come in and walk about the house or yard where he listeth, without giving over to follow him: but if he put forth his hand to touch anything, then will they fly upon them and kill them if they may. I had one myself once, which would not suffer any man to bring in his weapon further than my gate: neither those that were of my house to be touched in his presence. Or if I had beaten any of my children, he would gently have essayed to catch the rod in his teeth and take it out of my hand or else pluck down their clothes to save them from the stripes: which in my opinion is not unworthy to be noted."

Later that century in 1570, Johannes Caius (1510-1573) first mentioned the name Bandogge in his book 'De Canibus Britannicis' (Of English Dogges). He presents the Bandogge and Mastiff as one. They are watchdogs, servicable as hunters against fox, badger and boar. Caius also writes 'They bait and take the bull by the ear, when occasion so required'. As watchdogs Bandogges are courageous, can be violent and stands in fear of no man...He continues to say these dogges also being trained for bear baiting. 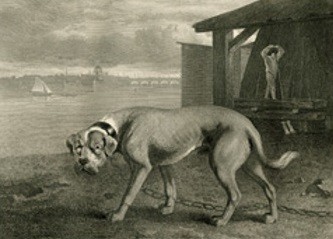 "When screech-owls cry
and Bandogges howl
and spirits walke,
and ghosts break up their graces".

"Bandog, a Catenarius Canis, a dog chained up at a farmhouse to alarm by his fierce barking, also called a Tye-Dog".

The name Bandogge is most likely derived from the fact that this type of dogs were tied to the chain as guard dogs..hence the older spelling Band-dogge or Bonddogge. The name Bolddogge which appeared here and there finds its origin perhaps in the fact these dogs had to be very courageous to be able to fulfill their duties....fighting bulls and bears.

Early 17th century dogs used for bull baiting became known as Bulldogs (first mention of that name was in a letter dated 1632) and slowly these Bulldogs and Mastiffs were developing into separate types. The Alaunt which is usually regarded as their ancestor is said to be extinct but in fact they be merged into the specialized Mastiff - and Bulldog types. Through history it's been stated that Alaunts and mastiffs are the same (Caius, Sherwood...) but already in the 14th century Gaston Phoebus made a distinction between Alaunts and Mastiffs. So it remains a compromise between different theories but the fact is that Bandogs always remained what they are, a type bred for a task...